Difference between Octopus and Octopi

Key Difference: Octopus refers to an inveterate animal which belongs to the Phylum Mollusca. ‘Octopi’ is a mistaken plural of octopus. 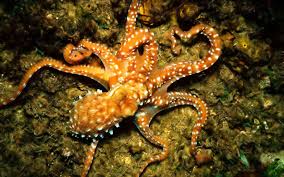 Octopus refers to an invertebrate animal belonging to the Phylum Mollusca. It has a distinctive feature of eight arms. It has a bag shaped body and the color of skin usually varies so that it matches the environment. It has a beaked mouth which is present on the lower side of the body. The arms of an octopus bear sensitive suckers. They are considered to be highly intelligent due to their highly developed brain. They have acute vision however, they do not have any of the hearing organs.

They are found in all types of oceans. The size of an octopus varies from 2 inches to 10 metres. There are numerous species of Octopus, nearly more than 200 species. They usually prefer to stay alone, usually in their dens.

Octopuses remain to be a favorite plural form especially in the U.S. and U.K. Most of the dictionaries consider ‘octopuses’ as the plural form of octopus as it has gained the status of the most regular English plural. Still, the correct classical plural is considered to be octopedes, which is very less famous.

Therefore, octopi is an incorrect plural of octopus. However, it is also considered to be acceptable by a few people.

Comparison between Octopus and Octopi: