Difference between Pachisi, Ludo and Parcheesi

Key Difference: Ludo and Parcheesi are two different board games that are quite similar in nature. Both have developed from an ancient Indian game called Pachisi. All three have the same objective which is to get one’s four tokens across the finish line first. 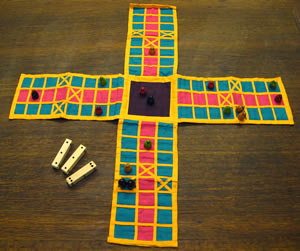 Ludo and Parcheesi are two different board games that are quite similar in nature. In fact, they are both so similar that they are often mistaken for each other. The reason behind this is due to the fact that both have developed from an ancient game called Pachisi.

Pachisi is a type of cross and circle board game that originated in ancient India. The game has been around for hundreds of years and has been quite popular both then and now. The game was played on a cloth board, where small tokens would be required to move around the board before making it to home. It was commonly played between 2 to 4 people and the first person to get all of their tokens to the end line wins.

The game was quite popular during its time, not only as a way to kill time, but also for betting. In fact, a version of the game is also reference in Epic Indian Tales. Due to the game’s popularity, many different versions of the game developed. Through there is no way to authentically decide which versions developed first and which came later, what is known is that there was a game similar to Pachisi being played all across Asia and even in some parts of Europe. For example, there was the Chinese game ch'u-p'u or chupu, Yunnori in Korea, Parchís in Spain and northern Morocco, Parqués in Colombia, the Jeu des petits chevaux (Game of Little Horses) in France, and Mensch ärgere Dich nicht (Man, don't get upset) in Germany. All of these are also types of cross and circle very similar in nature to Pachisi.

Over time the popularity of Pachisi declined with people focusing on other games. However, eventually the game was rediscovered and made popular again via modern versions of the game. Some of these include Parcheesi, Sorry!, and Ludo.

Ludo was first created and sold in London. It was clearly inspired from Pachisi but it upgraded the game to include a cardboard based board to play on, as well as included a dice and a dice cup rather than the traditional cowrie shells. The game was patented in 1896, and the name Ludo is Latin for ‘I win’.

In America, the game was developed into Parcheesi along similar lines of using a cardboard based board and a dice with a dice cup. Parcheesi was trademarked and published by Parker Brothers and Winning Moves. 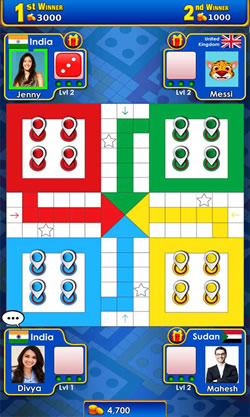 While both are developed from Pachisi, there are still certain differences between the two games, such as the way the board is designed. In Ludo, the board has arrows leading to the center of the board, thus highlighting the end point of the game, i.e. where the tokens must end up; whereas in Parcheesi the board is much more simple and follows the original design more closely. Another difference between the two is the fact that while Ludo is played with one dice, Parcheesi is played with two, thus resulting in higher numbers being rolled.

Regardless of these minor differences, the two games are still quite similar and firmly rooted in their traditional counterpart, Pachisi. Hence, the gameplay in both Ludo and Parcheesi is quite similar with the players rolling the dice, and trying to be the first to get their tokens to the end of the line. While the official rules are nearly identical, the games are also often played with different house rules which add to or modify the existing rules. Hence, one is never quite sure which rules the host is following.

The games Ludo and Parcheesi are both quite popular these days, in fact so much so that they are further adapting to the use of technology. As the age and popularity of board games decline in favor of video games and mobile games, these traditional games are also adapting to reach a newer generation of players. Once such example is the mobile game Ludo King.

Ludo King is a mobile game app which is available for use on most major mobiles including Android and iOS. It has garnered quite a popularity these days. Ludo King follows a gameplay based on Ludo, and has adapted the traditional game into a modernized format thus making it accessible to a whole new generation of players. Ludo King has been downloaded by millions of players and it can be said that it has revived the game once again.

Comparison between Ludo and Parcheesi: