Key difference: The Polarized and Non Polarized Sunglasses differ in their designs and structures. The polarized sunglasses are designed with a special type of lenses which block the horizontal light coming from the sun, whereas this type of design is absent in the non-polarized sunglasses, hence they are not able to filter out the glare.

The polarized sunglasses were first developed for the fishermen, in order to catch and view the fishes from the lower levels. These are a special type of glasses which selectively block the glare. These are specifically developed to view those images which are away or not able to view from a finite distance due to the sun’s brightness. Polarized lenses are especially designed to protect the viewer’s eyes from horizontal glare created by the sun. The polarized sunglasses have been enjoyed for years, by experts, boaters and fishermen in order to reduce the unwanted glare from water. Also, these are now becoming more famous among sportsmen, including skiers, golfers, bikers and joggers, as well as the general public. 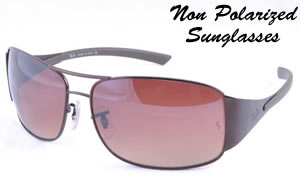 Non Polarized sunglasses, also function similar to that of the polarized sunglasses, but have some limitations. They protect the eyes from the harmful sun radiations and reduce the brightness, but along with that they also give a darker effect to the images. These sunglasses are designed and developed to filter out all the light due to which the image looks darker. They are available in uniform shades of dark colors which darken all light passing through them, regardless of the direction (polarization) of the light. These are generally preferred by everyone, as they are cheap in price. They have the ability to fulfill the basic function of protecting the eyes from the harmful bright intensity and light.