Difference between Puppet and Marionette

Key Difference: A puppet is a movable figure which represents a person or animal. It is controlled or manipulated by a puppeteer. Marionette is a puppet which is animated by using wires or strings. Marionettes are often considered to be complex than other types of puppets.

A puppet is simply a model that represents a human being or an animal. This definition must include a point which is the manipulation of these models by someone. They are used for entertainment of children. Puppetry is often looked to as the product of India, where it was initially used to depict the stories of Mahabharata and Ramayana. Initially, the art of puppetry was limited to temples and villages, but later it reached the outside world. It started being used to narrate various types of stories.

Puppets are available in many forms like Marionettes, hand or glove puppets and rod puppets. Marionettes possess articulated limbs and are manipulated using strings. Hand or glove puppets consist of a hollow strip of material, and a puppeteer places his hand inside this hollow strip to control the puppet figure, which appears on the outer part. Rod puppets are controlled from rods below. 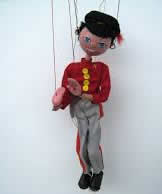 Puppets come alive as characters in theatrical performances, and the credit goes to the puppeteers. These puppet operators are basically responsible for all the movements of a puppet.

Marionettes are one of the popular puppets. They are manipulated by wires or strings. There are various notions regarding the origin of the word ‘Marrionette’. Some believe that it has been originated from the role of Jesus’s mother, Mary. However, some claim it to be the Old French word for musical instrument. They are believed to be originated in France during the Middle Ages. The movements of marionettes are considered to be better than the movements of other types of puppets. This is due to the flexibility provided by the strings. Thus, Marionettes are types of puppets, and thus contain the necessary elements to be considered as a puppet. However, the unique feature that separates them from other types of puppets is regarding their manipulation and control by the stings or wires.

Comparison between Puppet and Marionette: