Difference between Raisins, Sultanas and Currants

Key Difference: The term raisin refers to a dried grape. This could include any dry grape or specific grapes. The type of grapes vary depending on the country. The term ‘sultana’ is used to refer to raisins that are made from sultana grape. This term is usually used outside of the United States. Currants, Zante currants or Corinthian currants are dried berries of small, sweet, seedless black grapes known as the Black Corinth. 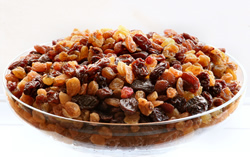 The term raisins, sultanas and currants are often confusing for many people because of the similarity in their appearance. In the first glance, all three look exactly the same, with slight color differences. Raisin is an umbrella term that includes both sultanas and currants as a type raisin. Let’s understand the term separately.

The term raisin refers to a dried grape. This could include any dry grape or specific grapes. The type of grape varies depending on the country. While, some use black grapes other countries use white (green) grapes. Raisin is produced in many regions of the world in incorporated in many different dishes. Sultanas and Currants are considered as type of raisins. In many countries such as the UK, New Zealand, Australia, Canada and Ireland, the term raisin is used to refer to the dark colored large dried grape, while sultana is used to refer to a golden-colored dried grape and currant for small dried Black Corinth grape. 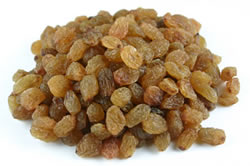 The term ‘raisin’ dates back to the Middle English, which is adapted from the French ‘raisin’ meaning grape, with a dried grape being referred to as ‘raising sec.’ Raisin is produced in four steps: Picking, pre-treatment, drying and post-drying. The first process only requires grapes being selected and picked for making raisins. This picked grape then goes through the process of pre-treatment, where it is treated with oil emulsions or dilute alkaline solutions. These solutions ensure that the grape berry looses water faster by two or three folds. Although, originally in the Mediterranean and Asia Minor, the grapes were dipped in a dry emulsion cold dip made of potassium carbonate and ethyl esters of fatty acids.

The raisin then put through the process of drying. Drying could be done in three ways: sun drying, shade drying, and mechanical drying. Sun drying and shade drying are usually cheaper but do not completely remove the water and take a longer amount of time. Mechanical drying is more popularly with the grapes being placed in microwave ovens for faster drying process. Microwave heating also produces puffy raisins. Following the drying process, the raisins are then sent for post-drying treatment where they are washed and cleaned to remove any foreign objects including removal of stems. The raisins are then ready for packaging.

The term ‘sultana’ is used to refer to raisins that are made from the sultana grape. This term is usually used outside of the United States. These are golden in color and are also known as ‘golden raisins.’ These raisins are treated with sulfur dioxide to maintain their golden color and are either dried on the vine or special racks. In the United States, the sultanas may have a darker hue because of process or sun drying the grape. Sultana is a white seedless grape variety known as the sultanina. In the US, these are referred to as the Thompson Seedless grapes. They are believed to originate from the Asian part of the Ottoman Empire. Any kind of green grape can be used to produce a sultana, as long as it maintains the golden color, but usually in the Middle Eastern countries these raisins are created from the sultana grape.

Currants, Zante currants or Corinthian currants are dried berries of small, sweet, seedless black grapes known as the Black Corinth. The name is derived from the Anglo-French phrase ‘raisins de Corinthe’, meaning “Grapes of Corinth.” The name Zante Currants comes from the Ionian island of Zakynthos (Zante), which was once the greatest producer and exporter of grapes and raisins. In addition to black currants, there are also red and white currants which are produced from different grapes. The currant is considered as the oldest raisin and was first recorded by Pliny the Elder in 75 AD.