Difference between Recession and Depression 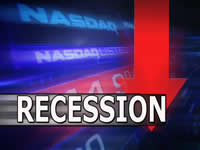 This cycle is usually measured by considering the growth rate of real gross domestic product. However, there is no set pattern to predict when an economy will be faced with expansion or contraction. However, many companies and some government divisions study the market to track any changes that might lead to fluctuations in the economy, and hence avoid them.

The economy enters into a recession when there is a general slowdown in economic activity. This entails that there is a widespread drop in consumer spending. This could be triggered by various events, such as a financial crisis, an external trade shock, an adverse supply shock or the bursting of an economic bubble.

In case the economy enters into a recession, the Government usually responds by adopting expansionary macroeconomic policies, such as increasing money supply, increasing government spending and decreasing taxation. 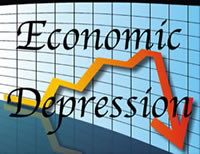 If the economy does not improve despite the government’s actions, and it continues to face a sustained, long-term downturn in economic activity, the economy is then considered to be in a depression. A depression is a more severe downturn than a recession; however there is no concurrent definition for a depression.

A depression is characterized by its length, by large increases in unemployment, and non-availability of credit. It is usually brought on by banking or financial crisis, shrinking outputs and cutbacks on production and investment, large number of bankruptcies, significantly reduced trade and commerce, currency value fluctuations and devaluations. A depression is also characterized by price deflation, financial crises and bank failures.

Some economists claim that an economy enters into a depression if and when the fall in GDP is more than 10%, and if it continues for more than 2-3 years. A phrase to define recession and depression is that a recession refers to the economy "falling down," while a depression is a matter of "not being able to get up."