Difference between Refugee and Asylum

Key Difference: A refugee refers to a person who seeks shelter in a country outside the country of his origin due to fear of persecution on the basis of religion, race, nationality, etc. An asylum is a place that offers a sanctuary or protection for criminals, debtors, political refugees, etc.

The words Refugee and Asylum are synonymous and go hand-in hand. However, the terms mean two complete different things. A refugee refers to a person who seeks shelter in a country outside the country of his origin due to fear of persecution on the basis of religion, race, nationality, etc. An asylum is a place that offers a sanctuary or protection for criminals, debtors, political refugees, etc. 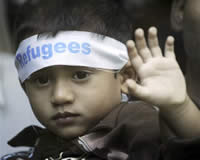 According to Merriam Webster dictionary, a refugee is defined as, “one that flees; especially: a person who flees to a foreign country or power to escape danger or persecution.” A refugee is a person that is forced to leave the country of his origin for reasons such as religion, nationality, race, ethnicity, beliefs, etc. Another term that is used for a refugee is an ‘asylum seeker’, as they are seeking a safe haven from their own country. A person may also be forced to relocate due to instability or war in their own country.

According to the United Nations Convention Relating to the Status of Refugees of 1951, a refugee is further defined as a person who "owing to a well-founded fear of being persecuted for reasons of race, religion, nationality, membership of a particular social group, or political opinion, is outside the country of his nationality, and is unable to or, owing to such fear, is unwilling to avail himself of the protection of that country.” In order for refugee relocation system to work, other countries, most commonly bordering countries, should be willing to accept refugees and provide necessary provisions for the refugees.

as, “an inviolable place of refuge and protection giving shelter to criminals and debtors; a place of retreat and security; protection from arrest and extradition given especially to political refugees by a nation or by an embassy or other agency enjoying diplomatic immunity.” The right of asylum is an old jurisdiction, which states that a person persecuted for any reason and cannot be protected by their own country can seek shelter or protection from another country. Egyptians, Greeks and Hebrews recognized a person the right of asylum that protected criminals from legal action. In medieval England, this right was given to the church, where a criminal taking refuge in a church could not be prosecuted for this crime for a certain number of days.

Article 14 of the Universal Declaration of Human Rights (UDHR) adopted by the United Nations General Assembly in 1948 states that, "Everyone has the right to seek and to enjoy in other countries asylum from persecution." A country harboring refugees cannot forcefully send them back. Refugees are offered benefits such as equal rights, food, medical, etc. In many countries offering asylum to political refugees have been facing restrictions due to immigration problems.