Difference between Secular and Religious 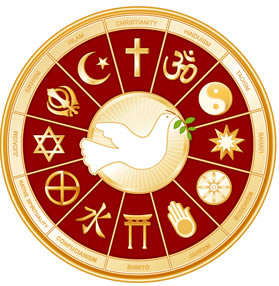 Religion is an organized collection of beliefs, cultural systems, and world views that relate humanity to an order of existence. Religious is used for people who are in accordance with the principles of religion.  It is usually refers to a member of a religious institute of monks, nuns, friars, or to another individual who takes the three vows of poverty, chastity, and obedience in a religious institute. The members of these societies take public vows and live a fraternal life in common. It is distinct from others; it is a form of holy life. The members are ordained as deacons, priests or bishops, who are then referred to as ‘religious clergy’. It is the bishop who exercises governance over diocese members; they are called as the diocesan clergy. The other religious members are lay people, not members of the clergy. There is no state of holy life, the institutes are themselves classified into one another. In clerical institutes, most of the members are clergy. Only in a few cases, the lay institutes have some clergy among their members.

Secular means not related to religion, and does not concern with it. It is a concept wherein a state or country prefers to be officially neutral in the matters of religion.There is no religious influence on the political decisions that are made by the government for the benefit of the people. The people are not subjected to religious rule by the government. The government believes in the individual living of the people, where people are not judged on the basis of their religion. There is no establishment of religion in the state. All the citizens are treated as equals. The government does not pressure people to understand all the rules and teachings of religion.

Comparison between Secular and Religious:

Superb . It helped me a lot to understand the difference between sucula and religion