Difference between Ring and Toe Ring

Key Difference:  The term ring is associated with an object possessing the shape of a ring or circular band. It is therefore used in context to many objects. However, in context to ornaments, it refers to a very beautiful ornament which is usually made of some expensive metal like gold or silver. Ring (finger ring) is worn on any of the toes, whereas toe-rings are worn on any of the toes. 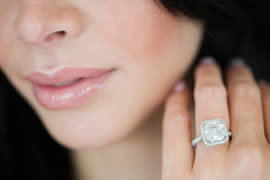 In context to ornaments, rings can be of many types – like nose ring, finger ring, ear ring or toe ring. However, mostly the word ring is used in context to finger ring. These circular bands are worn in fingers. They may be worn as a symbol of relationship or for fashion. Rings seem to be around since a long time. Historically, rings were also used for authentication. Theses signet rings carried a small seal on them. Egyptian mummies have also revealed that these rings were among the favorites of the Egyptians.

Wedding rings are exchanged between the couples in their wedding or engagement in many cultures. The custom is supposed to be started by the ancient Greeks who wore it on the fourth finger of the left hand, as it was considered that a vein of love runs through this finger to the heart. However, Romans always advocated wearing these rings on the right hand rather than on left hand. Today these finger rings come in various shapes. They are worn in different fingers and have currently gained the status of a fashion accessory.

The choice of material used for making finger rings is also full of many options. They come in various materials. According to Vedic Indian astrology, one should wear the rings of different gems on fingers. It is believed that these gems possess special powers. 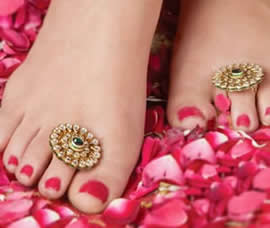 On the other hand, toe ring refers to a circular band which is worn on any of the toes. Like finger rings, it is also made of a variety of metals and non-metals. Toe rings play a significant role in the life of Married Indian women, who wear it as a sign depicting that they are married. It is usually worn on the second toe of the right and left leg. Toe rings have also created a market for themselves in countries like U.S.A., etc. where they are usually worn as a fashionable accessory.

Comparison between Ring and Toe Ring: