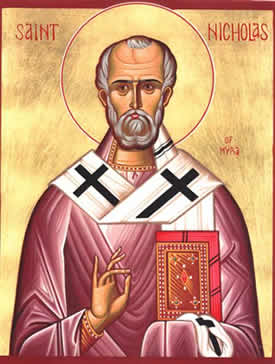 Christmas is one of the most anticipated holidays of the year. Children and adults everywhere love the feeling of Christmas, be it love of the family, warmth from the Yule fire, bright colorful decorations, or even Santa. Santa is the most common figure that is associated with Christmas, but what is Santa’s origin? Where does he come from? Why does he given presents to good children?

Santa Claus is also known as Saint Nikolaos (a well known saint from Myra, or a part of modern day Turkey). Santa is actually a variation of Saint Nikolaos. Let’s date the history back to the 4th century.

Nikolaos of Myra was born on 15 March 270 A.D. as the only child of wealthy parents. He is believed to be religious from a very young age. Nikolaos lost his parents at a very young age and was raised by his uncle. After he was ordained as a priest as an adult, he believed in helping the poor. Nikolaos gave away all of his own wealth to help the needy and the poor. Because of his actions, he was declared as a Saint.

According to legends, there are two occasions that prominently talk about his goodness and kindness. In the first legend, a father who has three daughters and no money for dowry plans to sell his daughters into prostitution. When the saint learns of the father’s plans, he drops bags of gold the night before the daughter comes of age in order to pay for the dowry. On the third time, the father of the girl confronts him to thank him and he claims that the father should thank only God. In this version, the Saint throws the bags of gold from the chimney but the daughter had put a stocking to dry near the chimney and the bag of gold fell into the stocking (where the legend of the stockings by the chimney comes from).

The second story tells about a time when there was a great famine in Myra and a ship was loaded with wheat that was to be sent to the Emperor of Constantinople. Nikolaos arrived and asked the sailors to remove some of the wheat, but the sailors refused as all the wheat has been properly weighed for the Emperor. However, Nikolaos explained to them that removing the wheat would have no effect on their weight. When the shipment was weighed again at Constantinople, the sailors found that the weight had indeed not been affected. However, Myra now had enough grain to plant as well as feed themselves for 2 years.

Additionally, Saint Nicholas is also the patron saint of sailors, merchants, archers, repentant thieves, children, brewers, pawnbrokers and students in various cities and countries around Europe. He was also a patron of the Varangian Guard of the Byzantine emperors, who protected his relics in Bari.

When Santa Claus was initially introduced, he did not have the portly figure or the elves. He was basically a variation of Saint Nikolaos. In 1804, John Pintard, a member of the New York Historical Society, distributed woodcuts of St. Nicholas at the society’s annual meeting. The background of the engraving contains now-familiar Santa images including stockings filled with toys and fruit hung over a fireplace. Following this in 1809, Washington Irving painted a picture of St. Nikolaos as, “a “rascal” with a blue three-cornered hat, red waistcoat, and yellow stockings to a man wearing a broad-brimmed hat and a “huge pair of Flemish trunk hose.” 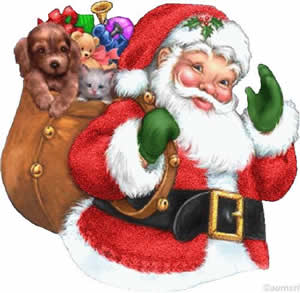 The Santa Claus we see today was invented in 1822, when Clement Clarke Moore, an Episcopal minister, wrote a long poem for his daughters named, “An Account of a Visit from St. Nicholas.” He described Santa as, “a ‘right jolly old elf’ with a portly figure and the supernatural ability to ascend a chimney with a mere nod of his head!” This went hit with many companies using Santa Claus to sell products and promote their stores. Celebrations of Christmas were moved from 6 December to 25 December to coincide with the birth of Jesus Christ.