Difference between Secular and Democratic

Key difference: Secular means not concerned with or related to religion. Democratic is a concept relating to the principles of democracy.

Secular and Democracy are two unrelated terms. This article helps to simplify and differentiate between the two ideologies.

Secular does not include religion in a political system. It gives people a free reign from all the religious rules and teaching. A secular government is neutral in the matters of religion. It supports neither religion nor irreligion. It does not combine politics with religion; any decision made is not under the influence of religion. People are free to be individuals and  are not looked upon regarding their religion or religious beliefs. Government frees the people from a religious rule. It claims to treat its citizens as equal regardless of their religion. Secular states do not have an established religion state, although an absence of religion doesn’t really mean that the state is completely secular. A state can become secular during the establishment of the state (e.g. United States of America or India) or upon secularization of the state (e.g. France or Nepal). 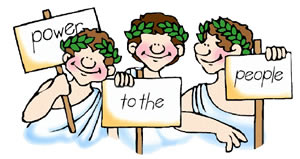 Democracy is a form of government made by the people. To be democratic, one requires to follow the principles of democracy. A democratic government is based on the idea that all citizens are equal and are guaranteed same rights under the law. Democracies are elected by the majority of the people and they feel that what is right should be followed by the government. It is the direct rule of the people. There is no hierarchy in systems. It consists of social, economic and cultural conditions that enable the people to be free and equal. It supports all forms of religion. In a democratic state, larger the number of religions practiced by the people, larger is the significance of religion in the political, cultural and social life of the people.

Although Secular and Democracy are two different things, secularism, when combined with democracy is useful; the dogma of a religious agenda is removed from the system and it gives political freedom to the people to make their voice heard.

Comparison between Secular and Democratic: