Difference between SGML and XHTML

Key difference: SGML and XHTML, both are programming languages, which are used for transcribing digital documents. XHTML is a production of the XML language, whereas SGML was derived from GML. SGML has produced HTML code.

SGML and XHTML, both are considered as markup languages. In computer technology, a markup language is a set of words and symbols that highlight the text to define it for a web document. It is important to understand the roles that SGML and XHTML languages play in web page design, they have a distinct connection with each other. The relationship between these two languages is considered as a family bond that helps make websites work and web design dynamic. 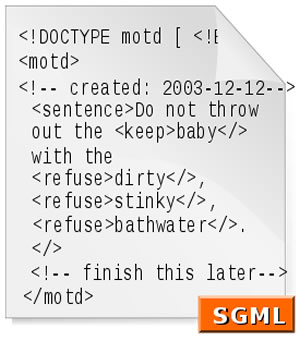 SGML descended from IBM's Generalized Markup Language (GML), which Charles Goldfarb, developed in the 1960s. As a document markup language, SGML was originally designed to enable the sharing of machine-readable large-project documents in government, law, and industry. Many such documents are required to remain readable for a long time in the field of information technology. It was also was extensively applied by the military, the aerospace, technical reference and industrial publishing industries. The advent of the XML profile has made SGML suitable for widespread application for small-scale, general-purpose use.

According to Wikipedia, SGML generalizes and supports a wide range of markup languages. These languages ranged from Wiki-like syntaxes to RTF-like bracketed languages to HTML-like matching-tag languages. It is considered a little less sustainable, as it does not supports many applications by the browsers. Documents containing liberal errors require more time to process. The page has slower loading time and downloads speed.

It has become an international standard in specifying the description of the type and content of digital documents. SGML can be considered as the mother language of HTML and XML, which are now widely used for transcribing digital documents. With time, the popularity of SGML has rapidly increased. There are few barriers to SGML as well, since there are no widely supported style sheets in SGML, unstable software is developed due to SGML’s strong settings. Besides, SGML data interchange has become very complex due to varying compatibility among the software packages, which can cause serious problems.

According to Wikipedia, XHTML stands for Extensible Hyper Text Markup Language. It is derived from XML markup languages that mirror or extend versions of the widely used Hypertext Markup Language (HTML), the language in which the web pages are written. 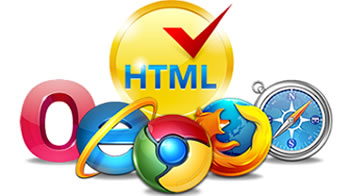 The XHTML language is a draft which was prepared as a formulation of HTML 4.0. A family of digital documents was later developed under the subset of HTML. There are many reasons as to why developers decided to develop XHTML. This language was intended to be extensible so that the users can design their own tags. It is portable, which allows the non-desktop agents to access the digital documents through the internet. This language is a production of XML, whereas the SGML has helped produce HTML. XML was also designed to be extensible. Thus, the XHTML became extensible as well.

HTML is considered as more sustainable than other languages. With the increasing web applications becoming more sophisticated, the popularity of XHTML keeps on increasing.  It supports a huge number of applications, which helps to create complex websites. The XHTML documents follow the XML rules and can be converted into many file formats such as PDF, RSS or RFT. Due to shorter error processing routines, there are few browsers which can support XHTML to perform at faster speeds. It reduces the page loading time and download speeds. It features closing tags. Some of the browsers that can accept XHTML documents are Google Chrome, Mozilla Firefox, Opera, Camino, Galleon, Safari and many mobile browsers.

Comparison between SGML and XHTML: