Difference between Leopard and Cheetah

Key Difference: Leopards have large muscular, short legs, long body and a large skull. It uses its strength and stealth in order to kill its victims. Cheetahs are tall and slender and have a smaller head in comparison to the body. Cheetahs are famous for their speed and agility. Leopards have Rosetta shaped spots, while cheetahs have a large thumb print type spots. 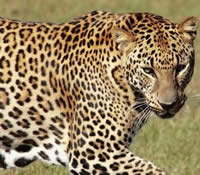 Distinguishing a leopard from a cheetah in one glance is not easy, as they have a lot of similar features. Most of these similarities arise from the fact that they belong to the Animalia Kingdom and Felidae Family. Both the cats are quick, carnivorous and vicious animals. However, these cat-like species are very different from each other.

While leopards are more solitary creatures and like to hunt in single numbers, the cheetahs prefer smaller groups. Cubs in both the species live with their mothers up to the age of two before they start hunting on their own.

Cheetahs have been known to depend on their bursts of speed in order to hunt down victims, while leopards bank on their silent, stalking skills. A cheetah will carry its kill to a solitary hidden location to save the kill from other animals; however a leopard carries its kill up a tree. Both of these vicious cats have also been known to prey on humans, but fit leopards and cheetahs are known to prefer wild prey compared to humans. Cheetahs can go from 0-60 miles per hour in three seconds. Leopards have can run up to 36 miles per hour.

Leopards have white eye linings under their eyes to help accelerate their vision during the night. These differ from a cheetah’s black “tear lines” that help them see during the day under the sun. Cheetahs have six known subspecies, whereas leopards have nine.

Other distinguishing differences include: