Key difference: Xperia J was announced in October 2012 as a cheaper variant of the Xperia T, resulting in the phone sporting a similar design to the T. The Xperia J features a 4-inch scratch-resistant TFT touchscreen that offers a pixel density of 245. The Nokia Lumia 520 is a 4-inch IPS capacitive touchscreen smartphone that offers 480x800 pixels display, which offers approximately 233 ppi. The phone comes with 8 GB internal memory that can be expanded up to 64 GB. The phone offers 1 GHz on its dual-core snapdragon S4 and only 512 MB RAM, which is slightly disappointing. 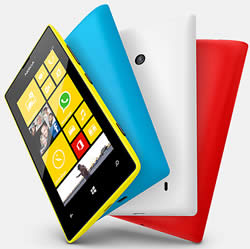 Nokia is a Finnish cell phone company, well known for its superb battery power and durability of its phones, and is the only phone that has not yet integrated its smartphones with Android. Nokia has been single-handedly leading Microsoft Windows OS 8 in the smartphone market. Most of the smartphones have become a pricy accessory to own, and if people opt for a cheaper phone, they must sacrifice on some features. To make a mark in the low- to mid-range smartphone market,

Nokia has announced the Lumia 520, which should be available in April 2013 in India (release dates for the rest of the world is yet unannounced) and is currently up for pre-orders on many websites. It has even reached to the second-spot following Samsung Galaxy Grand on the Indian website, Flipkart. The phone is a variant of its big brothers 820 and 920, minus some ‘flash’ features. The Lumia 520 is a 4-inch IPS capacitive touchscreen smartphone that offers 480x800 pixels display, which offers approximately 233 ppi. This is pretty good display screen for a mid-range smartphone.

The Lumia 520 is a bar phone with the straight sharp edges and is available with the standard Windows Tile layout. The phone comes with 8 GB internal memory that can be expanded up to 64 GB. The phone offers 1 GHz on its dual-core snapdragon S4 and only 512 MB RAM, which is slightly disappointing. Another let down is the lack of a secondary camera, which makes it difficult to video conferencing. The phone does offer a 5MP autofocus primary camera, with 4X digital zoom and no flash. However, the company claims to use the same digital lens that is found on the flagship.

The camera offers features such as Landscape orientation, Auto and manual exposure, Auto and manual white balance, Cinemagraph lens and Smart Shoot lens. The smart shoot lens allows the user to change individual objects in the photo and replace them with objects from the other photos. For example: incase the user is taking photos of two people; however, he does not like the expression of one person in the photo, they can swap the face for another face from another photo. The phone is customizable with changeable shells. The phone has a monoblock casing with the sleep/wake button, camera button and volume buttons on the right-hand side of the phone. Nokia also offers the Windows Office, plus Nokia Music and Nokia Maps. The phone also offers many different features including 7GB free SkyDrive storage.

The information for the detailed table about the two phones has been taken from Sony Mobile website, Nokia website, techradar.com and GSMArena.com