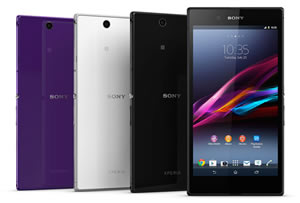 On July 3, 2012, Sony launched its latest smartphone, the Sony Xperia Z Ultra. The Xperia Z Ultra is a build up on its flagship phone, the Xperia Z. As compared to the Xperia Z, the Z Ultra has a bigger screen, a 6.4 inch TFT Capacitive touchscreen. The company has also marketed the device as "the world's slimmest Full HD smartphone."

Continuing the legacy of Xperia Z, the Xperia Z Ultra is also dust protected, low pressure water jet protected, and waterproof. It is also shatter-proof and scratch-resistant. The Ultra also utilizes the same "Omni-Balance" design as Xperia Z. The phone features a 6.4 inch screen, on which the user can take notes or draw on with a regular pen or pencil.

Under the hood, the phone has a 2.2 GHz Qualcomm MSM8974 Quad Core processor and 2 GB of RAM. It also features an 8 MP camera fast-capture camera with Exmor RS, with 16X digital zoom, as well as a 2 MP front-facing camera. It is powered by a 3050mAh Lithium polymer battery and has 16 GB of internal memory, which is expandable via a microSD of up to 64 GB.

The LG Optimus G Pro is the successor to the original LG Optimus G and resembles the Samsung Galaxy Note II in size and features. It adds major updates to its predecessor, the LG Optimus G. The device sports a massive 5.5-inch True Full HD IPS touch screen with multi-touch capability and a pixel density of 401 ppi.

Under the hood, the phone is powered by 1.7 GHz Quad-core Snapdragon 600. The device offers internal memory capacity of 32 GB, which can be expanded further using the microSD slot by 64 GB. The device provides 2 GB worth of RAM. The device comes with an NFC, Infrared port, USB and Wi-Fi hotspot capability. The device houses a SLi-Po 3140 mAh battery that is removable.

The device houses a 13 MP primary camera for picture that support 4208 x 3120 pixels, and a 2.1 MP secondary camera for video conferencing or calls. Both the cameras have the ability to take videos at [email protected] One feature on the phone is the Dual-recording feature (similar to the one on the S4), which allows the user to record videos simultaneously from both of the camera. Another feature that is boasted by the company is the Virtual Reality Panorama shot that allows the user to take images and stitch them together for 360 degree panorama shots (this feature is very similar to the Photo Shoot on the Nexus 4).

The information for the detailed table about the two phones has been taken from the Sony Mobile website, theverge.com, engadget.com and GSMArena.com.