Difference between Sorcerer and Wizard 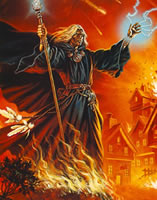 Essentially when discussing the terms ‘sorcerer’ and ‘wizard’ in fantasy, there isn’t much of a different. Actually, historically, there is no difference at all. The difference has arises more so in the modern interpretations of the term, especially by fantasy authors, who interpret these terms as beneficial to them and their stories. Hence, the terms differ in meaning from story to story, game to game, and in each person's mind, depending on what literature they are familiar with.

The term ‘wizard’ was used in Middle English most likely between 1400 and 1550. The first part of the word "wiz" is similar to the modern "wise," while the suffix "-ard" was usually used to denote people regularly engaged in that activity or totally imbued with that characteristic. Hence, ‘wizard’ can be directly interpreted as someone very wise and knowledgeable.

The term ‘sorcerer’ can be traced back to circa 1520 Middle English, where the word "sorcer" was derived from the Middle French "sorcier," which in turn was derived form the vulgar Latin "sortiarius," meaning "one who casts lots." This was in turn derived from the proper Latin word "sort-/sors," meaning "lots" or "fate." The term ‘sorcerer’ has now come to mean the one who casts a lot of spells or magic usually for evil or personal gain.

They both is their basic form mean someone who practices magic, i.e. a magician. A magician is any person that can and does use magic and can also be called magic-user, mage, magister, archmage, sorcerer/sorceress, shugenja, witch, wizard, warlock, wu jen, enchanter/enchantress, illusionist, diviner, conjurer, or thaumaturge. The magic is often understood to be derived from the universe, or from supernatural or occult sources.

Magicians, sorcerers, wizards, and other practitioners of magic often appear in myths, folktales and literature throughout recorded history, and fantasy draws on this background. They often play the roles of mentors and/or villains. Overtime, differences have crept up, with authors preferring one type of practitioner of magic over the others for a specific type of role. For example, wizards came to play the role of guardians or advisers and are often portrayed as wielding great powers. Sorcerers, also have great powers, but are often portrayed as using those powers as evil or to help evil for personal profit. They are more often than not defeated in the end by either the hero or by the wizard.

Both wizards and sorcerers usually gain their ability through innate talent or study. This has now come to refer more to wizards than sorcerers. Wizards are depicted as having a special gift which sets them apart from the vast majority of characters in fantasy worlds who are unable to learn magic. They are often shown as reading or studying big and vast tomes of knowledge, called grimoires, and are surrounded by magical props, such as crystal balls, wands, staves, books, potions, scrolls or tinkling bells, are often ever-present animal companions, which may act as familiars. The power of a wizard may be limited temporarily to his access to his books or grimoires.

Sorcerers are distinguished from wizards as having an innate gift with magic, as well as possessing blood of a mystical or magical origin. Sorcerers are usually shown as conjuring magic out of thin air, or weaving dark spells needing rare materials, such as gemstones, blood or a life sacrifice. They may or may not be shown as evoking spirits, demons or gods, to do their bidding or to make a bargain with them in return for power.

Wizards can act the part of the absent-minded professor, being foolish, prone to misconjuring, and generally less than dangerous; they can also be terrible forces, capable of great magics that work good or evil. They are often portrayed as old, wearing robes or cloaks, a wide-brimmed tall pointed hat, white-haired with a long white beard, sparkling knowledgeable eyes, and walking with a staff. The robes are often brightly colored and spangled with stars and moons, astrological symbols, or with magical sigils. The staff is usually powerful and acts as a wand channeling magic. Sorcerers, on the other hand, are portrayed as wearing robes, small squinty black malicious eyes, may or may not have a beard, and may or may not have a staff.

Popular examples of wizards: Gandalf in The Lord of the Rings, Albus Dumbledore from the Harry Potter books, Merlin from the Arthurian Legends, Ged from Ursula K. Le Guin's A Wizard of Earthsea, the Wizard of Oz, Harry Dresden from The Dresden Files, etc.

Popular examples of sorcerers: Balthazar from the movie: The Sorcerer’s Apprentice, the sorcerer from Disney’s Fantasia, Morgan le Fay aka Morgana from the Arthurian Legends, Baba Yaga, a sorceress in Slavic mythology, Circe from Greek mythology, various Sith sorcerers in Star Wars, etc.