Difference between Sprain and Strain 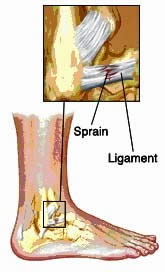 Many people use sprain and strain interchangeably. However, they both refer to two different types of common injuries related to muscoskeletal system. A sprain is that kind of injury in which a ligament or a joint capsule gets tear or stretched.

Ligament is a thick and strong fibrous tissue which connects the end of one bone with another. They provide the support to body joints.  Due to this injury, joint can become instable. One should not try to force a joint beyond its capability of motion like in case of turning the ankle beyond its limit. Pain and inflammation are common symptoms of a sprain. However, in severe type of injury, one may not be able to even move a limb.

Severity of a sprain is defined by three degrees ranging from mild to most severe. 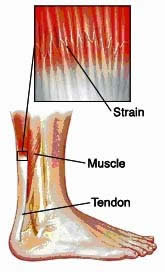 On the other hand, strains are injury pertaining to tendons or the muscles. Tendons are connective tissues by which muscles are attached to joints. Stains can occur during running or jumping as they include a sudden stretching and contracting motion. The symptoms of sprains are  similar to that of a sprain which includes pain, swelling, stiffness and reduced capability of function. A strain is also known as “torn muscle”, “ruptured tendon” and “muscle pull”. Like sprains, strains are also categorised according to their severity.

Generally, most of the sprains and strains do not require any serious treatment as they get to resolve with time. However, sometimes physical therapy or surgery may be required. Anti-inflammatory medications are also prescribed for getting relief from pain and inflammation of the injury.

Comparison between Sprain and Strain: