Difference between Sugar and Molasses

Key difference: Sugar is the generalized name for sweet-flavored food substances. Sucrose, table sugar, is mainly extracted from either sugarcane or sugar beet. Sugar, is available in many forms in the market. Molasses is a by-product of the sugar production process; be it of sugarcane fiber, beets or grapes. 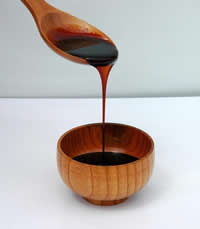 Molasses, on the other hand, is a by-product of the sugar production process; be it of sugarcane fiber, beets or grapes. Still, the most commonly available molasses is that of sugarcane. In order to make molasses, the cane of a sugar plant is harvested and stripped of its leaves. The juice is then extracted usually by cutting, crushing and mashing. The extracted juice is then boiled and concentrated. The concentration of the juice leads to the crystallisation of the sugar, which is whisked out. After the first, boiling the molasses can be packaged and sold as is or may be further processed. If sold, this type of molasses is often termed as ‘cane sugar’ especially in the United States of America, as the syrup still contains most of the sugar content, which has yet to be extracted.

The molasses can be further processed via a second boiling and sugar extraction. The molasses then would acquire a slight bitter tinge to its taste, as now a good percentage of the sugar has been extracted. Again, the molasses can either be sold or further processed via a third and final boiling and sugar extraction. After the third boiling, most of the sugar in the syrup has now been extracted. This leads to the molasses acquiring a robust flavor. This type of molasses is often termed and sold as, ‘blackstrap molasses.’

Blackstrap molasses is considered healthier than other refined sugars, as it contains trace amounts of vitamins and significant amounts of several minerals. Blackstrap molasses is a source of calcium, magnesium, potassium, and iron; one tablespoon provides up to 20% of the daily value of each of those nutrients. Due to this, blackstrap molasses has long been sold as a health supplement. It is also often used in the manufacture of ethyl alcohol and as an ingredient in cattle feed.