Difference between Ticks and Lice

Key Difference: Ticks are arachnids that feed on blood from their host and change hosts after feeding. Lice are parasites that attach themselves to the host’s hair and feed on blood, particles and skin.

Ticks and lice are parasitic infestation that can cause problems for humans, animals and other creatures. These two creatures survive on the blood of the host they attach to. Lice are commonly found in the hair, while ticks can be found all over the body, including hair, arms, stomach, clothes, etc. Ticks and lice are often confused as the same due to their similarities in appearance; however they differ from each other in many ways. 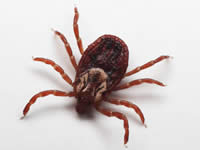 Ticks are tiny, wingless, ectoparasites that belong to the Arachnida class, the same class that spiders belong to. There are various different types of ticks such as the American deer tick, sheep tick, and cattle tick. Ticks can be classified into three families: Ixodidae (hard ticks), Argasidae (soft ticks) and Nuttalliellidae. The hard ticks often have a small hard shell on the back of their mouths. They are often found all over the world, commonly in warm, wooded and humid conditions. Ticks require a certain amount of moisture in the air for metamorphosis. Ticks do not spend their whole lives on one host and depend on a variety of hosts from a variety of species for nutrition.

Ticks are divided into two primary sections: the anterior capitulum and the posterior idiosoma. The anterior capitulum contains the head and mouth of the ticks, while the posterior idiosoma contains the legs, stomach and reproductive organs. Like all arachnids, ticks have eight legs. They have a two year life cycle, during which they can infect up to three hosts. In order to attach to a host, the ticks climb to the ends of leaves, plants and shrubs and wait for the host to pass by them. They then attach themselves to the host and find an appropriate place to feed, which include travelling all over the body. They also like shaded areas such as the ears, hair, the inside of the arms, etc. After the ticks are full, they drop from the human and hide until they require another feeding for metamorphosis.

They commonly affect preschool and elementary school-aged children, who unknowingly infect each other and others close to them, such as family members. However, getting a head lice infestation is not a sign of bad personal hygiene or an unclean living environment. It is an itchy infestation commonly spread through close personal contact and by sharing personal belongings. The louse has six legs and scuttles very fast, like a crab, as oppose to jumping. The louse had has pincers at the end of the legs, similar to crabs, which allow them to hold on the hair. Hence, lice are harder to find and dislodge from the hair.

Lice can survive on blood, dead skin particles, among other things. Lice also do not usually leave bite marks in the skin. They just cause itchiness in the scalp. Some types of lice are known to leave small, red bumps on the scalp, neck, and shoulders, which may become crusty and ooze. However, these are rare occurrence. Furthermore, lice spend their entire lives linked to human beings, usually a single human. Lice are also not able to carry and spread diseases.