Difference between Visa and Passport

Visa and passport are two things that are required for International travelling. These two terms are often used when visiting other countries. Though both of these are required while travelling, these two are different from each other and serve different purposes. 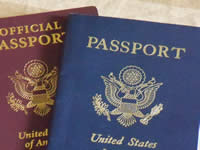 A passport is a document that is issued by the national government that is used as a personal identification when travelling abroad. It can also be used for identity proof inside the country as well. The passport lists the nationality, the country of origin, name, birth date, address and various other details about the holder. It is an legitimate document that can help prove the holder’s identity.

There are various different types of passports that are issued with regards to the holder:

Visa is an official document that is issued as permission for entering and residing a country. A person planning to visit a specific country would have to issue a visa for that particular country asking the government for permission for entering and residing in the country for a specific period of time. Almost all countries require a visa for a person to enter into their boundaries; however some countries do not require any visa such as Albania, Austria, Belgium, Kenya, etc. These are distant from the passport and the visa is usually printed as pasted on a page in the passport.

Both of these are important documents that are required in order to travel to foreign countries. Any misrepresentation on either document can result in a fine, banishment or punishment.

Wao! This relief me, nice clerifications.thanks a lot.

Thank you for giving me a chance to open this website..I am really glad and it's help this a lot to me... Godbless