Difference between Weather and Climate

Key Difference: Weather is the state or conditions of the atmosphere over a short period of time, usually a day or so. Climate is the average conditions that are expected at a certain place over a number of years.

Weather is the state or conditions of the atmosphere over a short period of time, usually a day or so. The weather changes day to day and forecasting must be done continuously in order to determine the sudden changes in the weather. In many places, weather changes from hour to hour, minute to minute and season to season. The NASA lists the components that effect weather includes sunshine, rain, cloud cover, winds, hail, snow, sleet, freezing rain, flooding, blizzards, ice storms, thunderstorms, steady rains from a cold front or warm front, excessive heat, heat waves, etc.

An example of weather includes a sudden rain shower in Australia on a hot, sunny day. This would be a change in weather of the place. Weather is affected by differences in air pressure of one place and another. The pressures and temperature differences can occur due to the sun angle at any particular spot. Weather also includes natural disasters such as tornadoes, hurricanes, typhoons, etc. Though these are rare, they are considered as a change over a small period of time. Weather phenomena occur in the troposphere, the lowest level of the atmosphere. Though weather does occur in the stratosphere and can affect the weather in the troposphere, it hasn’t been completely understood yet. Weather is also an important in shaping the Earth through erosion, weathering and breaking down of soil segments. Weather can be forecasted accurately these days due to the science and technology, which can access the conditions of a certain place and successfully predict the weather conditions. 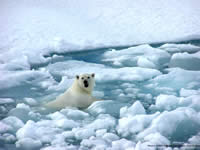 Climate is the average conditions that are expected at a certain place over a number of years. Climate is usually the long-term conditions of a certain place over a period of number of years. For example, if a place is constantly warm and dry, the climate of the area is said to warm and dry. Scientists claim the Earth’s climate system includes five major components: atmosphere, hydrosphere, cryosphere, land surface, and biosphere.

The Intergovernmental Panel on Climate Change (IPCC) glossary defines ‘climate’ as, “Climate in a narrow sense is usually defined as the "average weather," or more rigorously, as the statistical description in terms of the mean and variability of relevant quantities over a period ranging from months to thousands or millions of years. The classical period is 30 years, as defined by the World Meteorological Organization (WMO). These quantities are most often surface variables such as temperature, precipitation, and wind. Climate in a wider sense is the state, including a statistical description, of the climate system.”

Climate can see changes, however these changes happen slowly and over a large period of time. For example due to global warming, the melting of glaciers is causing snow in places where it has never snowed before. The climate of a location is affected by latitude, terrain, and altitude, as well as nearby water bodies and their currents. Climate is determined by the statistics of temperature, humidity, atmospheric pressure, wind, precipitation, atmospheric particle count and other meteorological elemental measurements.

The website really helped me too. Now I know that they are the same and different. But mostly there different. Because Weather is the state of the atmosphere on a current day at a current time. It changes day to day.Climate is the average conditions that are expected at a certain place over a number of years. But there the same because weather changes into climate in a way.

It was not bad