Difference between C and C++ with Examples | Programming Languages 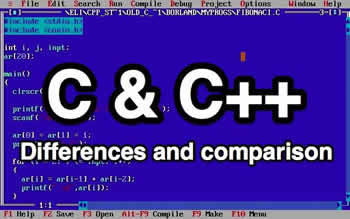 C++ originally started out as an enhancement to C. It was designed to be source-and-link compatible with C. However, it added classes, virtual functions, operator overloading, multiple inheritance, templates, exception handling, etc. Eventually, it developed enough to be considered a programming language in its own right. It was originally ratified in 1998 as ISO/IEC 14882:1998 certified programming language. Today, C++ is now commonly used for hardware design.

C is a general-purpose programming language that uses semicolon (;) as a statement terminator, as well as curly braces ({}) for grouping blocks of statements.  It has facilities for structured programming and its design provides constructs that can map efficiently to typical machine instructions.  It also allows lexical variable scope and recursion and has a static type system, which prevents many unintended operations.

Furthermore, C does not support NAMESPACE feature, whereas C++ does. A namespace is a definitive region which allows one to group identifiers (the names of types, functions, variables, etc). Namespaces can then be used to organize code into logical groups and to prevent name collisions. This is especially helpful when the code base includes multiple libraries, which ideally makes the code prone to name collisions.

The two languages also differ in the manner the address memory functions, input-output, and GUI programing. For instance, C uses calloc(), malloc() and free() functions for allocating and de-allocating memory, while C++ utilizes new and delete. C uses scanf() and printf() for input and output, while C++ uses cin>> and cout<< operators. C supports GTK tool for GUI programming, whereas C++ supports Qt tools for GUI programming. Another difference is that C requires one to declare all the variables at the top of the program, whereas in C++, the variables can be declared anywhere in the program.

Additionally, C++ is usually considered to be easier to learn, as it more user friendly than C. C++ also has numerous additional functions that makes coding easier, especially for someone who is new to the C framework. However, many claim that it does actually matter. The two languages differ so much, that they can in fact be two different languages independent of each other. One thing to keep in mind is that C is much more structured than C++, whereas C++ was designed to be more expressive and abstract than C.

Comparison between C and C++:

Some Examples of Difference between C and C++: