Difference between Internet and Ethernet 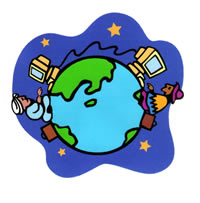 Both Ethernet and Internet are types of network that are used to connect computers. However, the scope and range of these networks differ. The Ethernet is a local area network (LAN) which connects computers in a local location. There are thousands and hundreds of thousands of Ethernet networks. The internet, on the other hand, is a massive wide area network (WAN) that computers far away can connect to in order to access information. There is only one internet, however. It can be said that the internet is a network of networks.

Internet is the massive global system that connects computer networks around the world together. Millions of private, public, academic, business, and government networks worldwide connect with each other over the internet to share massive amounts of information, resources and services. Internet is what we use to access web pages, send e-mails, listen to music or watch videos online. It hosts an extensive range of information, one that we generally take for granted today. 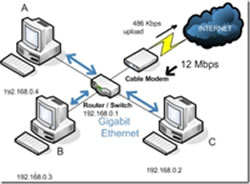 In layman’s terms, Ethernet is the network that connects your computer and laptop to the printer and modem. The modem in turn connects to the Internet, through which you can chat or skype with your friend, hundreds of kilometers away. Hence, your computer, laptop, printer and modem make up one Ethernet network. As you can imagine, there are therefore thousands of Ethernets all over the world. Businesses also use Ethernets to connect all of their computers to a main server, which hosts their companies’ information.

Another difference between Ethernets and the Internet is the issue of security. Ethernets are usually safe, as it is a closed network, i.e. people from the outside have limited or no access to the network. However, an internet has open access, i.e. everyone can access the data and information online. This opens a way for people to hack you computer and plant viruses and malware. So, one should be careful. A lot of anti-virus, anti-spyware and anti-malware programs have been developed for users.

Thanks man who has written this now I clearly understood the difference, this was very helpful to me.

Now I know , thanks

The difference is explained in a very simple language and process.

Thanks.. Very simple language is used to explain the difference between Internet and Ethernet. I work for an internet service provider www.internetbroadband.in and in my free time I read topics related to my field. Thanks to team of DifferenceBetween.info

Thank You very helpful to understand the difference