Difference between Nuts and Bolts

Key difference: A bolt is a type of screw used to hold objects together. A nut is a small metallic object which is fastened to a bolt.

Bolts and nuts are nearly always used together to fasten a stack of parts together. A nut is a small metallic object, whereas a bolt is basically a screw.

A nut is a small hexagonal object made out of metal. It is shaped in a hexagon so that it is easy and firm to grip from all sides. It has a hole in its centre, which has a thread running around it. A thread is a spiral cut groove. It is used as a fastener to a matching bolt. The bolt and the nut are kept together by a combination of their threads' friction. Nuts come in various types, including hex, cap, coupler, wing, turnbuckle and lock. 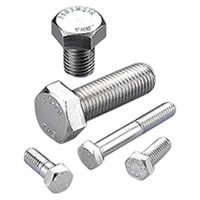 A bolt is a long metallic piece that has a round stem as its body. The body is threaded in a helical (circular) manner. The metallic piece is topped with a head on one end that allows it to be turned, either into the object or the nut. Some bolts are threaded its full length, while some are threaded for a small length at the other end, opposite the head. There are many types of bolts, such as hex type, square, round and flat head bolts. Bolts called studs and threaded rods don’t have heads, anchor bolts or toggle bolts.

Nuts and bolts are mainly made of metal, usually carbon steel. They are often coated with zinc, which prevents corrosion. Aluminum, plastic, brass, stainless steel and just steel are also sometimes used to produce nuts and bolts.

Selecting which nut and bolt to use where depends on the environment in which the object is, as well as the strength and thickness of the object.

Am so appreciate ur site, tnks so much