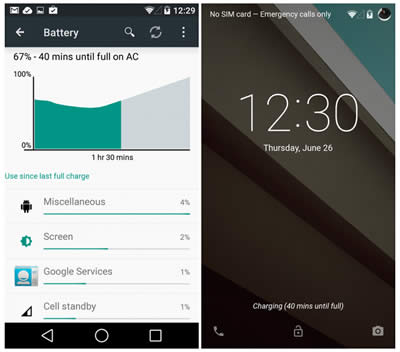 Android Lollipop is the latest Android version that was introduced by Google on November 12, 2014. It was initially under the codename Android L, which resulted in a lot of speculation of the name of the version. Sticking to naming its versions after sweet and sultry desserts, Android named its latest version, Lollipop.

Android has introduced many different changes in this version. In addition to the mouth-watering name, the latest design of the UI is just as intriguing. The company has also tried to make the UI and the device itself more user-friendly and has also focused on making the UI more uniform.

The latest Material design goes back to its roots with 2D, but cards built on top of the flat 2D surface. The card-based design is livened up with more bright colors, compared to the dull and boring models from before. The company has focused more on animations and fluid motions to ensure no break in motion of the applications used. Major changes have also been made to the applications and lock screen. The lock screen now offers more motions, allowing the user to access the camera by swiping left, dialer by swiping right and for notifications to show up directly on the lockscreen. It also allows the user to reply directly from the lock screen, saving the user t from having to constantly unlock the phone. However, the user has the power to choose what messages (or rather what kind of messages show up on the notification screen).

Another brilliant feature is the Do Not Disturb application, which empowers the user to decide which important messages show up in the middle of the night, with the spam or less important messages to be silently recorded on the phone for the user to look through at their own ease. Another visible change is the back, home and the recent apps button that are located on the bottom panel of the screen. The buttons have been given a makeover, inspired from the old (now ancient) video players. It now features a triangle, a circle and a square, making it look like PlayStation controller.

The company has boosted the performance of the phone and has launched a new Project Volta, which reorganises background app activity into batches to save unnecessary phone waking. The phone also does not send automatic data requests if it sees a weak signal, waiting for a more powerful signal to connect to the network. The company has also focused on making the UI work seamlessly on different platforms, which means that the user can access the same information on his smartwatch, phone, tablet, etc. Another innovative feature that was desperately required on previous models, is the ability to add multiple accounts on one device. Android 5.0 allows multiple accounts, including a guest account. More changes include settings, connectivity, performance, media, OK Google, Accessibility and Android TV.