Key difference: Both Maruti Suzuki 800 and Maruti Suzuki Alto 800 are hatchback variant cars manufactured and sold by Maruti Suzuki in India, and a few other countries of the world. They differ in terms of their build, performance, features, etc.

Maruti Suzuki 800 was first launched in the year 1983 and since then has gone on to become one of the most sold cars in the world. The 800 was one of the very first hatchback cars to be sold in Asian countries such as India, Nepal, Pakistan, Bangladesh and Sri Lanka. The car features a decent 796 cc engine, which is run only on petrol, with a mileage of 16.1 kmpl. Accommodating four persons at once, the 800 facilitates manual transmission using four gears. Having seat upholstery made of artificial leather, the 800 doesn’t provide the standard conventional features such as an anti-lock braking system, airbags, central locking, alloy wheels, etc. It would be a major folly on one’s part to expect modern provisions from a traditional machine like the 800, especially at the price at which it is marketed. However, the 800 still proves to be a cheap and viable means of transportation that promises reasonable performance, along with a happy nostalgia of one's yesteryears. 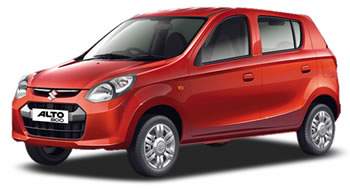 The Maruti Suzuki Alto 800 is an upgraded version of the Maruti Alto model, released by Maruti Suzuki in the year 2000. The Alto 800 was launched in the Indian car market on October 16, 2012. The car is a major departure from its predecessor, i.e. the Maruti Alto. The Alto 800 features a complete redesign of its predecessor's engine, the chassis, the décor, etc. However, this car still features Maruti’s iconic 796 cc displacement capacity, by which the title 'Maruti 800' was actually coined. Staying true to its pedigree, the Alto 800 is a five door hatchback which runs only on petrol. Additionally, the car features front power windows, power steering, seat upholstery made of fabric, and a single airbag provision for the driver. Undoubtedly, the most striking quality of this car is its mileage, which is an impressive 22.74 kmpl. This number can be even bettered, when the Alto 800 is driven outside the city limits, with no obstructions or traffic jams. All in all, the Alto 800 is an honest reinvention of the Maruti Alto, and perhaps the Maruti Suzuki 800 as well.