Gold is associated with luster, beauty and power. The discovery of gold thousand years ago was in form of shining yellow nuggets. Gold was found in various places in its natural form. Gold was a metal that impressed early civilizations with its brilliance, natural beauty and luster. Apart from possessing these features the great malleability and resistance to tarnish, made it extensively popular.

Gold is regarded as first of the metals that was widely known to human beings. Gold occurs in virtually pure as well as workable state. Gold was money in ancient Greece. The Greeks searched and mined gold throughout the Mediterranean and Middle East regions by 550 B.C., and both Plato and Aristotle had written about gold and its origins.

Gold is soft but still it is a heavy metal. The fineness of gold is determined with various factors. The k in 24k gold and 22k gold stands for karat that is a unit of purity. The symbol of karat is k or kt. The pure gold is very soft and hence, it is very difficult to use that gold for purposes like making of ornaments, etc. Thus, gold is mixed with other metals like copper and silver, in order to make ornaments. 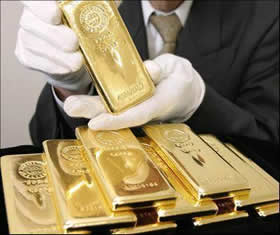 Karat is also spelled as carat outside the United States. The fineness for gold in terms of karat is expressed as being equal to the 1/24 part of pure gold in an alloy. It is used to express the percentage of pure gold found in the item of gold. If the karat is high, it means that the gold content is also higher and same goes with lesser karat meaning less gold.  A medieval coin made of gold was known as mark. It weighed about 24 karats; karat for the coin was theoretically equal to the weight of the seed of the coral tree. Thus, the karat derived 24 number as the standard number that is used in ratios to determine the purity.

24 karat- this is regarded to be purest gold.

18 karat- this defines 75:25 ratio of gold to other metals in the item

24k gold is regarded as the purest form of gold. As the gold is pure, it is too soft and thus it is very difficult it to be worn daily as any ornament or use it for any other purpose as it may break or bend. The purity in percentage is expressed as

However, it actually means 99.0 percent to 99.9 percent pure gold and this 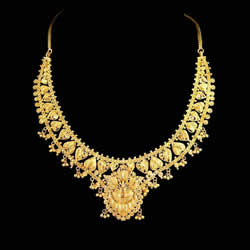 percentage depends upon the laws of countries. In China, 24 karat gold is known as “Chuk Kam” and has a minimum of 99.0 percent of gold in it. As this gold is very soft, other metals are mixed with gold to create a gold allay that can be used easily for various purposes. When pure gold is mixed with other metals, then gold may also take various colours like green gold, pale yellow gold, rose gold, pink gold, white gold, etc, depending upon the mixture.

22k gold can be defined by the same formula to obtain the percentage of gold present in the alloy. It is determined by-

It means that in 22k gold,  91.66 percent gold is present and rest is impurities like other metals. The addition of other metals to the gold, makes it durable and strong. Thus, it is preferred over pure gold in terms of strength and durability. The 8.4 percent of other metal can be copper, silver, etc.  The price of this gold depends upon the metal that is mixed with it. For example, a 22k gold obtained from mixing of silver would be expensive than the 22 k gold obtained from mixing copper.

As already explained 24 or 22k refers to the purity of gold, and 24k gold is the purest gold, but due to its fragileness it is not preferred for making durable things whereas 22k gold is less pure than 24 k gold, but due to the impurities mixed with gold, it is stronger and durable in comparison to 22k gold. 24k is expensive than 22k gold. 24k gold is preferred for investment purposes, whereas 22 k can be used for ornaments and other things. In many countries it is a legal standard to stamp gold jewelry to indicate its karat.

Your provided detail against Gold is outstanding. I pay thanks to you.

Thanks for brief explanation