Difference between AC and DC Electricity

Key Difference: Direct Current (DC) means that power in flows in one direction. In Direct Current, the flow of electrons is in a constant direction without changing at intervals and is accomplished by placing steady magnets on the wire. Alternating Current (AC) power differs from DC as the flow of electrons in AC constantly changes, from forward to reverse and so forth. This is possible by placing rotating magnets along the wire and as the polarization of the magnets change so does the flow of the electrons.

Alternating Current and Direct Current are two different forms of currents that are used to send electricity all over the world. Both the currents are similar as both involve flow of electrons in order to send electricity, but the similarities end there. AC is the more common type of electricity, which is transmitted by power plants and is used to power buildings, offices, houses, etc. 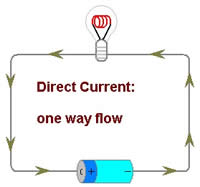 Direct Current (DC) power was the predominant form of electricity that was used in the 19th century and was also used in Thomas Edison’s first commercial electric power transmission. DC means that power in flows in one direction. In a DC, the flow of electrons is in a constant direction without changing at intervals and is accomplished by placing steady magnets on the wire that help electrons stay on a steady path. DC was originally named “galvanic current.” Direct currents flow in conductors such as wires, but can also through semiconductors, insulators, or even through vacuums. Direct currents can be produced by using sources such as batteries, thermocouples, and solar cells. The chemical energy inside a battery only has enough power to push electrons and not pull, resulting in energy being flowed in one direction. 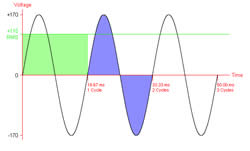 DC is most commonly found in applications that require low power and can be run on batteries or solar power cells. However, another popular application where direct currents are used is in automobiles, where most automobile parts run on DC and are converted from AC using alternators. DC was discontinued as a primary method of powering homes and buildings as they could not travel long distances without losing energy. Power and voltage in a DC remains unchanged under stable conditions, resulting in the time rate of energy delivered by the source to remain unchanged. DC voltages have a non-zero voltage time curve and are always positive, but can increase and decrease.

Alternating Current (AC) power differs from DC as the flow of electrons in AC constantly changes, from forward to reverse and so forth. This is possible by placing rotating magnets along the wire and as the polarization of the magnets change so does the flow of the electrons. Today, AC power is used to transmit electricity and power homes, offices, etc, as it is easier to transport this power. Nikola Tesla is credited for developing the foundations of AC power supply because of his AC transmission lines. The AC power usually flows in a sinusoidal waveform, but can also flow in trapezoidal, triangular, and square form. Radio and audio signals are examples of alternating currents.

Power plants produce alternating currents with the help of rotating turbines which produces magnetic fields that push and pull the electrons causing them alternate in flow. The constant pushing and pulling continuously reverses the magnetic polarization, resulting in electrons to reverse directions as well. An AC voltage also continuously changes between positive and negative. AC delivers a current and a voltage in a sinusoidal waveform, resulting in both having a peak value (VP) and a minimum value. The constant changing of the direction is known as the frequency of the current and is measured in Hertz. An AC generally has a frequency of 50Hz or 60Hz depending on the country.

Alternating current became the primary method of power compared to DC due to being able to easily produce and transmit. The alternating characteristics of AC minimize energy loss due to resistance in the conductors when transmitted over longer distances. AC voltages are easier to produce and transmit compared to DC voltages. A capacitor will pass an AC voltage, but will block a DC signal, while an inducer will allow a DC voltage and block an AC signal. AC power is more suitable for devices such as lamps and heaters, while DC is more ideal for an electronic circuit. AC can be converted from one voltage to another using a transformer, while DC can be converted to AC using a motor generator set or an electronic inverter circuit.