Difference between Apple and Android

Key Difference: Apple is designed around a graphical user interface. Apple Inc was formerly known as Apple Computer Inc. The Apple system is divided among different types of operating systems: Mac line of computers, the iPod music player, the iPhone smartphone, and the iPad tablet computer. Android is an open source, free, Linux-based operating system for smartphones and tablets. The system was designed and developed by Android Inc., which was funded and later purchased by Google in 2005. 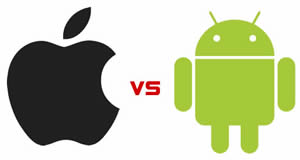 Apple designs, manufacturers and markets mobile communication and media devices, personal computers, and portable digital music players, and sells a variety of related software, services, peripherals, networking solutions, and different digital content and applications. The original Apple Computer, also known retroactively as the Apple I, or Apple-1, was a personal computer released by the Apple Computer Company (now Apple Inc.) in 1976, in California. The CEO of Apple, Steve Jobs removed the word ‘computer’ from the company's name and introduced the iPhone on January 9, 2007. The Apple operating system is currently in its 5th generation.

The company’s most current versions of Apple for all types of devices include: Apple iPad in 2010, from where it started a new trend of tablets, and iPhones which allow 3G, 4G, Wi-Fi and many other capabilities while running on the iOS operating system, making the iPhone a smartphone. Products like Apple TV, Mac, iPad, iPod, iPhone and various softwares are the most known products and are selling tremendously in the market. Apple's brand loyalty is considered unusual for any product. Macintosh refers to any computers produced by Apple Inc. Apple in 2009 introduced a newer version operating system called Mac OS X 10.6 Snow Leopard. 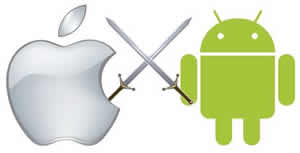 Android is the software operating system developed and manufactured by Google. It is a Linux-based operating system that was initially designed for touch-screen compatible smartphones and tablet computers. The OS was originally developed by Android Inc. and was later purchased by Google. Primarily, Google only maintained and provided the OS to other cell phone manufacturers. However, the company later started collaborating with other companies to create and cell smartphones. After Nexus 4, the company recently launched its latest Nexus 5 in collaboration with LG.

The company has also tied up with Samsung and HTC for other Nexus devices. Android has gained market share by offering customization capability, more Apps, frequent updates and also being available on various unusual devices. Google also has an application distribution platform that has a range of different apps from various developers, dubbed Google Play, originally named Android Market. The latest major update in Android is 4.4 Kitkat. Originally, Android is packed with lots cool features that deliver a smarter and more appealing user experience.

Comparison between Apple and Android:

I Love the Android and just wish it has an inbuilt security system... But how can you secure the phone then against destructive threat like Viruses and malwe and other stuffs like that???