Difference between Bear and Bull Markets 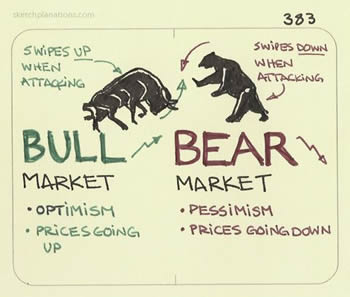 The financial markets can be a mystery to all but those who are actively traded in them. One such difference, which often tends to differentiate between a stock broker and a layman, is the difference between bear and bull markets. These two terms are often used to describe the stock market, the economy, as well as

These two are named for the respective fighting styles of the animals. The bull attacks by thrusting their horns up, whereas a bear attacks by swiping their paw downwards. This is a clue for what they stand for. The bull with its upward attack, describes a market that is doing well, whereas the bear with its downward attack describes a market that is not doing so well.

In a bullish market, the economy is doing well. The stock prices are increasing, while the unemployed is low and the GDP is high. Here, the outlook is that things will continue to improve, i.e. the outlook is positive.

On the other hand, in a bearish market, the outlook is negative. Here, the economy is not doing so well. The stock prices are decreasing, while the unemployment rate is high, and the GDP is low. Hence, it can be seen why the outlook will be negative, with people thinking that things aren’t going to get better.

While most people wish it, it is not possible for an economy to constantly stay in bull mode. The economy is bound to face periods where it is bullish, whereas in other it is bearish. One will often follow the other after a while. 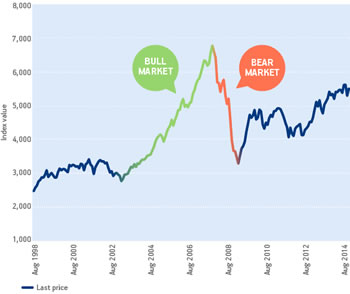 Many people tend to buy in a bullish market, as they don’t want to feel like they missed out on the gains which they may make as the market is going up. These same people tend to sell in a bear market, ideally before the market falls too far. However, there is no way to accurately predict a market trend, which is why many people tend to lose money in stocks. A bear market may rise a bit before continuing to fall even further. Similarly, a bull market may fall a bit before continuing to rise. These are called false starts, and can be very misleading. The ideal way to make steady investments is to make fixed size investments, and holding those investments for a long period of time. This creates a bit of stability in a world of trends.

Comparison between Bear and Bull Markets: