Difference between Black and Brown Mustards 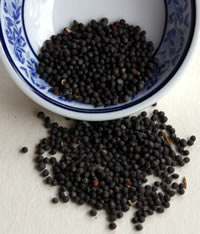 The black mustard seeds originate from the Middle East, and are now commonly grown in Argentina, Chile, the US and some European countries. The brown mustard seeds, on the other hand, originated at the foothills of the Himalaya. They are now commercially grown in Canada, the UK, Denmark and the US. Canada and Nepal are the world's major producers of mustard seed. They accounted for around 57% of the world production in 2010.

Mustard seeds are considered to be very nutritious, as they have a high amount of selenium and magnesium. Selenium is known for its high anti-inflammatory effects, while, magnesium has been proven to reduce the severity of asthma attacks and certain symptoms of rheumatoid arthritis and to lower blood pressure. Mustard seeds are also low in calories, high in nutritional value, and have a lot of antibacterial and antiseptic qualities. They are also very rich in calcium, manganese, omega 3 fatty acids, iron, zinc, protein and dietary fiber.