Difference between Blackhead and Pimple

Key difference: A blackhead looks like an embedded black pocket on the skin. However, some blackheads can be yellowish in color. A pimple appears as a bump on the skin, which looks red and swollen. 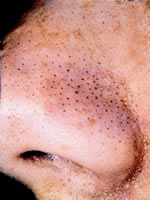 Blackheads and pimples are common examples of acne. Acne, also known as cystic acne or Acne vulgaris is a common skin condition that can affect teens, adults and even children. In addition to blackheads and pimples, acne has been known to cause other symptoms, such as seborrhea (scaly red skin), whiteheads, papules (pinheads), nodules (large papules) and possibly scarring.

Generally, acne develops after puberty and is mainly triggered by surges in hormone levels. The higher levels of hormones lead to over stimulation of the sebaceous glands. These sebaceous glands are microscopic glands in the skin that are responsible for secreting an oily substance called sebum. The sebum lubricates and waterproofs the skin and hair. If there is too much sebum then it tends to clog up the pores and hair follicles by combining with the dead skin cells. Clogged up pores, in turn, become comedomes (blackheads and whiteheads) or pustules (pimples.)

If the clogged up pores are open, the oil and dead skin in the pores are exposed to the air. This leads to the oxidization of the oil. When the oil is exposed to the air, it turns black and hence becomes a blackhead. A blackhead looks like an embedded black pocket on the skin. However, some blackheads can be yellowish in color.

If the pores in addition to oil and dead skin contain bacteria, then the pore is considered as infected. The oil and dead skin which plug the hair follicles allows the bacteria to thrive and grow. As the bacteria multiply, the body sends white blood cells to fight the infection, which events causes the follicles to bulge and produce bumps that are commonly associated with acne. When this infection spreads through the wall of the follicle into the surrounding skin, a pimple is formed. This is why it is recommended not to pop a pimple as it may cause the infection to spread and lead to more pimples. A pimple appears as a bump on the skin, which looks red and swollen. 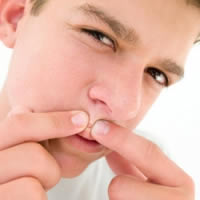 Blackheads are considered as the first stage of acne. They tend to form before the bacteria invade the pores of the skin. A blackhead can then develop into a pimple. Blackheads and pimples tend to occur most frequently on the face, however they can also occur on the chest, back, arms, and inner thighs. Products with salicylic acid, over the counter or prescription, can help clear up pimples and stop the infection from recurring. Blackheads are best removed with blackhead strips or a blackhead remover. Since, blackheads look like dirt embedded in the pores of the skin, it is easy to assume that they are. However, this is not the case, and scrubbing the skin will not make them go away but may cause irritation that makes them worse.

A person with oily skin tends to be more prone to blackheads and pimples. However, contrary to popular belief, eating sweets, chocolate, or oily foods do not bring them on. The best method to prevent blackheads and pimples is through regular cleansing of skin. This will reduce clogged pores and make it easier for the skin to breathe. Also, one should avoid using lotion, sunscreen or cosmetics that are oil based. One should try to use products that have the words "noncomedogenic" or "water based" on the label.