Difference between Buddy and Dude

Key Difference: Buddy is an informal way to refer to a male friend. Dude is a slang term in American English for an individual. 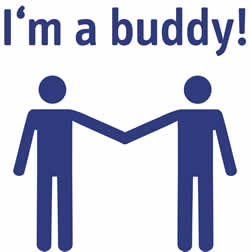 Many would have heard or used the words, buddy and dude, when sitting or chit-chatting with friends, or when a guy is asking for something to an unknown person. However, what do these words mean? Are they applicable for everyone?

According to Dictionary.com, ‘Buddy’ is:

Buddy is an informal way to refer to a male friend. It might refer to a best friend or in the American English, it is also applicable for mate. Buddy is sometimes used as a synonym for friend. It is also specifically denoted to a friend whom with one engages in a particular activity, such as study buddy, etc. It is an informal word, but not slang.

According to Dictionary.com, ‘Dude’ is:

Dude is a slang term in American English for an individual. The word is applicable for everyone, but it is typically used for males. The term was derived from the Scottish term for clothes, duddies. It is an old phrase, which was typically used in the 70s and 80s to mention the person who is dressed in a very fashionable manner. In those years, dude was also meant to a person whose physical appearance, refined language and leisurely pursued places an important role. Dude does not necessarily has to be a friend of the other. It simply means, a male, man or boy. One refers to the other person as a dude, without even knowing them. Dude also refers to an aggressive tone. For example: ‘Dude, better mind your own business!’

Comparison between Buddy and Dude: