Difference between Caramel and Butterscotch

Caramel and butterscotch are two sweet toppings, candies or sugar treats that are popular all around the world. The sugar lovers everywhere know the sweet, tangy and blissful taste of these two, but many people still manage to confuse the two. Though, they look similar in color, texture and are made from similar ingredients, they are different from each other in taste and process of making. 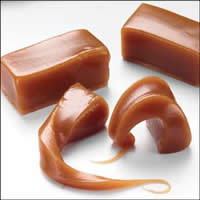 Caramel is confectionary product that is made by heating any of a variety of sugars. Caramel is most commonly made from white sugar. It is dark beige to golden brown in color and has a syrupy texture and thickness. In order to make caramel, sugar is heated slowly to around 170 °C (340 °F), which results in the sugar molecules breaking down producing sweet, dark syrup. The term ‘caramel’ has been traced back to the Medieval Latin term ‘cannamellis’ meaning “sugar cane” and the Latin term ‘callamellus’ meaning “little reed” another reference to sugar cane.

Caramel can be used in many different forms such as flavoring for puddings and desserts, filling in bonbons, éclairs and chocolates, as a topping for ice cream, custards, caramel apple and caramel corn and in the form of caramel sauce and caramel candy. Caramel sauce is made by heating water and castor sugar on low temperature, until the sugar caramelizes, after which butter and heavy whipping cream or heavy cream, (whatever the recipe calls for) is added. The mixture is heated for a while longer, before it cooled and served. Caramel candy is a soft, dense, chewy candy made by boiling a mixture of milk or cream, sugar(s), butter, and vanilla flavoring. This is a popular candy that is sold wide-wide by many companies. Caramel toffees are hard caramel candies that are made by cooling caramel and allowing it to harden. 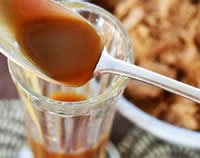 Butterscotch is a confectionary product that is made by heating brown sugar and butter. Depending on the recipe it can also include corn syrup, cream, vanilla, and salt. It is light beige and creamy in color, resembling sauce. In order to make butterscotch, sugar is boiled to the soft crack stage, instead of the hard crack stage used to create caramel and other hard toffees. According to a recipe printed in a 1848 newspaper by "Housewife's Corner" and Masluk Cream Co., for "making Doncaster butterscotch is one pound of butter, one pound of sugar and a quarter of a pound of treacle, boiled together."

The origin of the term ‘butterscotch’ is unclear though there are numerous theories including the term ‘scotch’ means "to cut or score" in reference the confectionary being cut into pieces, or "scotched" before it was hardened. Another theory includes that the word ‘scotch’ was derived from the word ‘scorch’. Butterscotch is often used as flavoring in candies, cakes, cookies, sauce, pudding, etc. They can also be packaged and sold as chewable candies or hardened toffees.