Difference between Chronic and Acute

Key difference: In terms of medicine, people often get confused between the ‘chronic’ and ‘acute’ conditions. The term ‘chronic’ refers to those diseases which are conditional and long lasting over a life time; whereas, ‘acute’ refers to an extreme and severe pain, which lasts for a short duration of time. 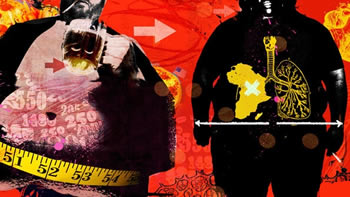 Chronic diseases do not show any symptoms in their prior stages. So, people are often unaware of these diseases. These are slow and gradual types of diseases, which damage the internal body functioning and affect the routine. The biggest drawback of these diseases are that if they occur once, they cannot be cured that easily, due to which they stay for a longer duration of time, maybe also for lifetime. The World Health Organization (WHO) reports 'chronic' as, “the non-communicable conditions to be by far the leading cause of mortality in the world, representing 35 million deaths in 2005 and over 60% of all deaths”. Today, these are the major causes of increasing mortality, especially among adults and the young. Most common example of chronic diseases is the HIV/AIDS, arthritis, asthma, cancer, COPD, and diabetes. These are diseases caused due to multiple factors and problems.

Acute diseases are of rapid onset nature, which occur for a short course of time. In context of medicine, the term ‘acute’ is generally used to refer to an acute phase of injury, referring to the immediate post-injury healing processes. The word ‘acute’ also refers to severe injury conditions, which are actually extreme in nature, but can be cured after a shorter duration of time. These are generally taken in a confused context with the severe type of diseases, but are actually different from them. However, not all the acute injuries are severe, there are quite a few distinguishable symptoms and factors, which keep them different from one another. The acute diseases if not cured at the right time, can give rise to further more complicated form of diseases. Hence, acute care is the early and specialist management of adult patients suffering from a wide range of medical conditions, requiring urgent or emergency care usually within 48 hours of admission or referral from other specialties. 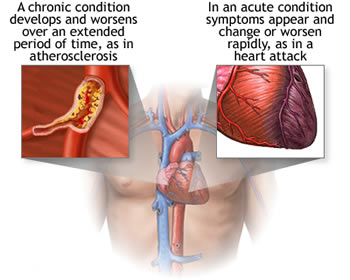 Acute and chronic, both are similar diseases, but they differ in their type and nature, for example: acute leukemia and chronic leukemia. To highlight in a broader way for acute, the sudden onset of acute myocardial infarction is a good example. The acute symptoms for a longer time duration are the causes for chronic diseases. Sometimes, the term ‘acute’ is used with chronic inflammation in pathology, generally used to describe the pattern of inflammation (which is a mixture of chronic and acute inflammation). There is also a ‘subacute’ state, which is a poorly defined state between acute and chronic, for example: subacute endocarditis, or subacute sclerosing panencephalitis. These states need to be cured and cared properly in order to avoid the highly chronic phases.

The curing of chronic and acute illnesses is a major issue while fighting against these diseases. However, the health care system has been slow to adapt to a focus on acute conditions. The acute illnesses are usually isolated to only one part of the bodily area, whereas in case of chronic illnesses, this stage rises as the beginning stage and slowly the infection spreads to the other body organs. The chronic illnesses usually require more care and resources, as compared to that of acute illnesses.

Comparison between Chronic and Acute: