Difference between Cofactor and Coenzyme

Key difference: Both, cofactor and coenzymes play an extremely important role in the metabolic functions of the body. A coenzyme is technically a type of cofactor, wherein coenzymes are defined as molecules that are bound loosely to an enzyme, and cofactors are those chemical compounds that bind to proteins. 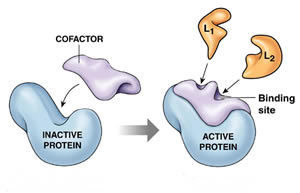 The ability of an organism to carry out hundreds of chemical reactions, within their cells, is what separates the organism from an inanimate object. These reactions are extremely important for survival, and carried out by the enzymes, coenzymes, cells and units present in the body. Out of these, enzymes are the essential proteins which help in controlling the metabolic and chemical reactions of a body.

Other compounds influencing these reactions are the coenzymes and cofactors, which are vital for helping the enzymes to carry out the reactions. Though, both have different functions and properties in a reaction, coenzyme is a derivative of cofactor. This can be very confusing, which is why, it is important to understand the differences between the two chemical compounds.

A cofactor is a non-protein chemical compounds that are bound tightly or loosely to an enzyme (protein), in order to increase the biological activity of the compound. It is extremely vital and used as a catalyst in a reaction. It is also termed as ‘helper molecule’ because of its biochemical transformations in the reactions. There are tow types of cofactors:

On the other hand, coenzymes are defined as small, organic, non-protein molecules, such as vitamins, that carry chemical groups between enzymes. Although, it is not considered a part of an enzyme's structure, coenzymes are acted upon by the enzymes for a reaction. It is also known as co-substrates. 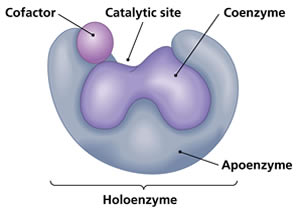 Although, coenzyme is a type of cofactor, it is a chemical molecule and a cofactor is a chemical compound. Also, coenzyme is a loosely bound cofactor to an enzyme, while cofactor is tightly bound to proteins in a reaction. During a reaction, the coenzymes function as intermediate carriers, wherein they make sure that specific atoms are carried out to the specific group, such that the overall reaction is carried out and finalized easily.

Cofactors, on the other hand, are needed and required to increase and analyze the speed of the reaction i.e. how fast the catalyst would act to complete the reaction. Many a times, cofactors and coenzymes have similar functions such as regulating, controlling, and adjusting the pace of these chemical reactions, and their effect on the body. Though, the differences between the two are given in the table below.

Comparison between Cofactor and Coenzyme:

In the table "Comparison between Cofactor and Coenzyme" example under cofactor is not "Proteins" but "Metal ions" i.e., for example Mg+2, Fe+3

Correction has been made!! Thanks!