Difference between Country and Nation

Key difference: A country is defined as a region or an area of a land which is controlled by its own government. The term ‘nation’ refers to a community or group of people who share the same history, language, descent and a common government.

It is common for people to use the terms, country and nation, interchangeably as if there is no difference between the two. However, one can come across a few variations when talking about the two geographical entities of a government. 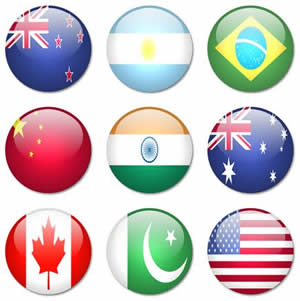 According to Wikipedia, a country is a region which is legally identified as a distinct body in political geography. However, by the modern legal definition of United Nations, it is defined as a state wherein the residents of the country have legal rights.

The term ‘country’ has been derived from the Latin word ‘contra’ which means ‘against’ or that ‘lies against’. It is also used as a synonym for a state or a former sovereign state. An independent State is the same as an independent country. When used with an initial capital letter, the term ‘State’ has a very different meaning. It is an area with internationally recognized boundaries and its own government. It must also be recognized by other countries and have sovereignty, meaning that it is not under the power of any other country. Other requirements for soveregnty include permanent residents, a transportation system, an education system, and an organized economic system. It issues its own money and is able to regulate both domestic and foreign trade.

The term ‘state’ is usually used to describe a smaller part of a large country. For example, the United States of America is the governing country, with 50 states which are smaller defined territories within a larger government. The term "province" may also be used in some countries, such as Canada. Many countries also have territories. A territory is under the government of a larger nation and lacks the governmental powers of a state or a province. Australia has six states and two major territories. Also, areas much smaller than a political state are called as ‘country’ like the ‘West Country’ in England, the ‘country-side’ used by Americans in various contexts by or ‘coal country’ which is used for parts of the US.

There is no universal agreement on the number of "countries" in the world, since a number of states have disputed over their sovereignty status. There are 206 total States, with 193 States participating in the United Nations, two observer States and 11 other States. All are defined as States under the declarative theory of statehood and constitutive theory of statehood.

The term ‘Nation’ mainly refers to a sovereign state, the United States of America is an example. It also refers to a community or a group of people who share the same history, language, descent, and a common government. 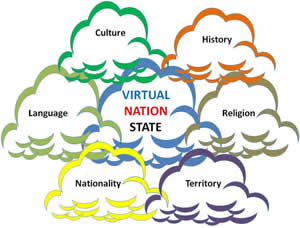 Nation has varying meanings and the connotation of the term has changed over time. Webster’s Dictionary defines nation as,

The word ‘nation’ came to the English language from an old French word ‘nacion’, which in turn originates from the Latin word ‘natio’ which literally means ‘that which has been born’. An ethnic community shares a common myth of origins and descent, a common history, elements of distinctive culture, a common territorial association, and sense of group solidarity. A nation is like an ethnic community but it is much more impersonal, abstract and overtly political. It is a cultural-political community that has become conscious of its coherence, unity and particular interests.

The term "nation" is a bit difficult to define. Nations consist of people having a common territory and a common government. The people of a nation share the same language, culture, institutions, history and religion. These groups are larger than a single tribe or small community, and often encompass an entire country. Some example are Japan, Germany, and France. When a nation of people has its own distinct country, this is referred to as a nation-state. They are not considered as sovereign states. These states have always been a subject of controversy and a huge security concern to the neighboring countries. Palestine is a notable example of this type of nation. Some countries can have multiple nations and not all nations can posses their own State.

The nation began to emerge in the late 18th century as the leading form of government and social organization. The national identity brought rights to vote, to hold office, and independence for a growing number of territories held under colonial rule. This catalyst brought about a change in its meaning under the influence of the African diaspora, specifically in the United States, where there were a large number of black groups being held under the government rule.

Comparison between Country and Nation: