Difference between Cretinism and Myxedema 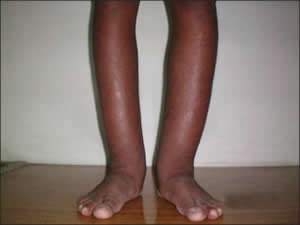 Myxedema refers to the muco-polysaccharides deposition in the layer of the skin, i.e. dermis. It results in the swelling of the affected areas. Any sign of myxedema occurring in the lower limb of the body is known as thyroid dermopathy. Myxoedema can occur in Hashimoto's thyroiditis and other long standing forms of hypothyroidism, as well as in an autoimmune form of hyperthyroidism i.e. Grave’s disease.

Myxedema is known to occur in both, hypothyroidism and hyperthyroidism. It is considered as a life threatening complication of any range of thyroid diseases. Myxedema coma is not common, but tends to be seen more frequently in elderly patients and in women. A person is more likely to catch it in the months of winter. Myxedema coma can actually result in death. Fortunately, the condition is rare. It occurs in the lower leg portion and behind the eyes. Before a patient develops myxedema coma, features of hypothyroidism are usually present and may have gone unsuspected for a long period of time. These symptoms include:

Myxedema can be treated by managing the underlying cause of the disease, i.e. curing hypothyroidism.

Cretinism is a medical condition caused by an untreated congenital thyroid hormone deficiency. It causes mental retardation and dwarfism. It is present from birth. 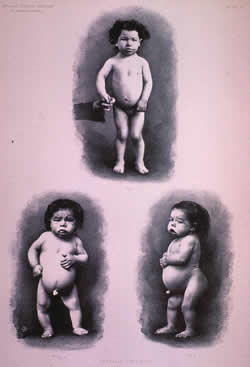 Cretinism can be common, genetic or periodic. If untreated, it results in mild to severe impairment of both physical and mental growth and development. Adult stature without treatment ranges from 1 to 1.6 meters depending on the severity of the disease, sex and other genetic factors. It also results in swelling of the skin and hair loss. Bone maturity and puberty are severely delayed. It can be so severe that the person cannot stand or walk. The cognitive impairment may be so severe that a person becomes non-verbal and is completely dependent on others for basic needs. Their thoughts and reflexes become slow. Other symptoms of cretinism are thickened skin, enlarged tongue or a protruding abdomen.

Cretinism arises due to the deficiency of iodine from the body. Iodine is often absent from the diet of the people. It is an essential trace element; it is necessary and required for the synthesis of thyroid hormones. Iodine deficiency is the most common preventable cause of brain damage. Although iodine is found in many foods, it is not universally present in all soils in adequate amounts. A deficiency of iodine also causes gradual enlargement of the thyroid gland, referred to as goiter.

It can be prevented by the consumption of iodine in the daily diet.

Comparison between Cretinism and Myxedema: