Difference between CT scan and Ultrasound

Key Difference: Ultrasound and CT scan are both types of medical tests. They are diagnostic tools that help doctors to diagnose a patient. They can be used to visualize internal systems without invasive surgery. CT scan stands for Computed Tomography Scan. It is a medical imaging procedure that uses X-rays to produce images of specific areas of the body. It produces tomographic images or cross-sectional images that allow the doctor to view the area slice by slice. Ultrasound, on the other hand, is a medical test which uses high frequency sound waves to produce a picture of the organs in the body. 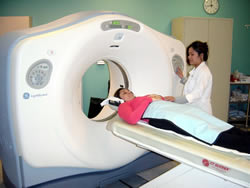 Ultrasound and CT scan are both types of medical tests. They are diagnostic tools that help doctors to diagnose a patient. They can be used to visualize internal systems without invasive surgery.

CT scan stands for Computed Tomography Scan. It is also sometimes called as X-ray computed tomography, computed axial tomography scan or CAT scan. It is a medical imaging procedure that uses X-rays to produce images of specific areas of the body. It produces tomographic images or cross-sectional images that allow the doctor to view the area slice by slice.

CT scan utilizes a form of digital geometry processing, which is ‘used to generate a three-dimensional image of the inside of an object from a large series of two-dimensional X-ray images taken around a single axis of rotation.’

The uses of a CT scan and its versatility to scan almost any part of the body have made the CT scan the go exam for almost all conditions. However, a CT scan also has many uses outside of the medical field, such as nondestructive materials testing and in archaeological uses, i.e. to scan the contents of a sarcophagi.

The usage of the CT scan has increased dramatically over the last couple of decades. In 2007, an estimated number 72 million scans were performed in the United States. However as the CT scan utilizes X-rays, they have been considered to have negative effects on the patients, as it exposes them to radiation. It is estimated that 0.4% of current cancers in the United States are due to CT scans performed in the past and that it may increase to as high as 1.5-2% with 2007 rates of CT usage. This estimate is disputed; however the negative implications of CT scans remain a legitimate concern.

Ultrasound, on the other hand, is a medical test which uses high frequency sound waves to produce a picture of the organs in the body. The process is called an ultrasound scan, whereas the images are often referred to as sonograms. An ultrasound scan may also be referred to as a sonogram, diagnostic sonography, and ultrasonography.

In a strict technical sense, ultrasound refers to the actual frequency above that which humans can hear. The limit is generally considered to be 20 kilohertz (20,000 hertz) in healthy, young adults. Ultrasound devices operate with frequencies from 20 kHz up to several gigahertz. Sonography is technically the practice of using the ultrasound frequency to create images inside the body.

Ultrasound is used in many different fields. It can be used for imaging, detection, measurement, and cleaning. Ultrasonics, i.e. the application of ultrasound, is also useful for changing the chemical properties of substances at higher power levels.

During pregnancy, ultrasounds are used to produce an image of the fetus. According to the American Pregnancy Association, there are seven types of ultrasounds: transvaginal, standard (2 dimensional or 2D), advanced (targeting a specific issue of concern), fetal echocardiography (assessing the heart), Doppler, 3D and 4D (also known as “dynamic” 3D because it focuses on the face and fetal movements). Ultrasounds are usually done in order to keep track of the pregnancy and to ensure that the baby is safe and healthy.  3D Ultrasound and 4D Ultrasounds have gained a lot of popularity with expecting parents. 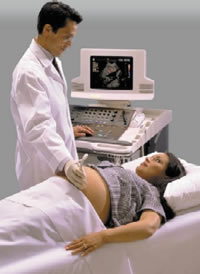 A main difference between the two types of medical tests is the fact that an ultrasound uses high-frequency sound waves for imaging, whereas, a CT scan utilizes X-rays. An ultrasound mainly produces a two-dimensional image; however, three-dimensional images are also possible. A CT scan, on the other hand, takes several two-dimensional X-rays around a single point of axis, thus allowing the creation of a 3D image.

As an ultrasound uses high-frequency sound waves for imaging, it can only image the organs that are closest to the outside. The sound waves tend to bounce off the first organ they find and as such the organs on the interior, including the heart and digestive track among others cannot be imaged using an ultrasound. For these organs, the CT scan becomes the test of choice.

Another difference between the two is in the machinery they use. The ultrasound machinery is usually mobile. It has a wand called a transducer that emits the sound waves. The transducer is connected to the monitor screen. The doctor or ultrasound technician moves the transducer over the area that is being examined, while simultaneously the image of the area is created on the monitor. These images can also be saved for posterity.

Alternatively, CT machines are large, stationary devices consisting of a table that is surrounded by a large, doughnut-shaped apparatus. The patient will lie still on the table, while the large circular machine takes the image of the area. Similar to ultrasound, the images are saved for posterity and for diagnosis.

Hello, I was in the hospital for 3 day's. And the two Doctors had me. Do a CAT SCAN with dye! Then decided to put my back in the hospital to do Surgery. Right away! They found gallbladder and pancreas problem's.They are Gastroenterologist and Endoscopist! When they Dr. Glamour and Dr.Bajwa. Found out I had a Primary gastroenterologist. They stopped the Surgery for November 16th of this week!! Now my primary gastroenterologist Dr. Schulman D.O. Has me scheduled for a ULTRASOUND for this month November 28th. Mean while I'm in so much Pain!! So my question is which one is better?? Dr. Schulman isn't even going to do the other two test the other Doctors were going to do? The RUSSIAN and the ERCP?? So what do you think??? Would Love to know soon!! Thanks so much, Terri

I have a question can ultrasound indicates a baby in a womb or can scan do it?

Thank you for the good explanation.

Thank you for this information. I just had a clear US and I'm now being directed to do a CT scan. I'm still in a panic but now know the difference.

Good explanation for the layman

This is my first time I have visited your site. I found a lot of interesting stuff in your blog. From the volume of comments on your posts, I guess I am not the only one! keep up the good work.

It is a good idea for description about CT scan.