Key Difference: Cultural Exchange is basically when one culture tries to learn about another culture. Cultural Exchange is an exchange of information, where information about their respective cultures is exchanged. Cultural Appropriation is taking things or ideas from a culture without accepting the culture itself or, without understanding or honoring the idea or practice behind it. 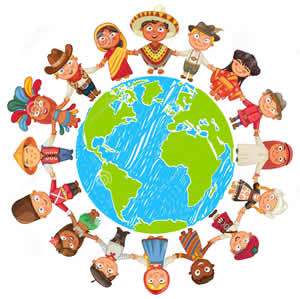 The sociologist Nicki Lisa Cole defines culture as the practices, beliefs, ideas, values, traditions, rituals, language, speech, modes of communication, material objects, and performances that are essential to the social life of any given group of people. Hence, any information about these things is considered as cultural exchange.

Cultural Exchange help facilitates understanding about cultures other than one’s own. It helps eradicate prejudices and misunderstandings, and most importantly stereotypes and racism. Hence, cultural exchange is a necessary part of a modernizing world, especially in one where one is constantly interacting with people of other cultures.

Cultural Appropriation is taking things or ideas from a culture without accepting the culture itself or, without understanding or honoring the idea or practice behind it. For instance, think about how Americans and Europeans like Ethnic Cuisines such as Indian, Mexican, or Chinese, but are racist against the people from that culture. Americans and Europeans are often complaining that these ‘outsiders’ come into their country and take all their jobs. 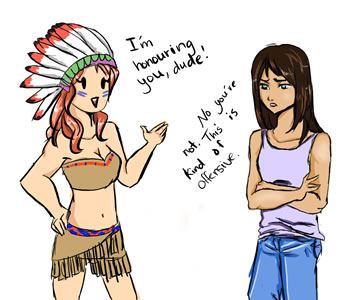 It’s not only about food. Keep in mind the times, when Americans wear Native American headdresses, despite the fact that headdresses are a scared symbol in the Native American culture. Also when Westerners wear saris and bindis, or kimonos, and head wraps. The problem is not that they wear them, but rather that they wear them without understanding their significance or importance to the original culture. It is even worse, when they sexualize it, such as a sexy sari or a sexy Pocahontas outfit, especially as costumes.

Cultural Appropriation is basically when a culture takes something and misrepresents it. It is often a byproduct of colonialism and oppression. The oppressing or ruling culture often adopts something from the culture it oppresses that it finds cool or interesting and exotic, without understanding the importance or significance of it for the oppressed group. This cool and exotic thing might be of religious and spiritual significance to the culture. Hence, to the oppressing group it feels that their oppressor are taking an important part of their culture and making a mockery out of it. It comes across as disrespectful and ignorant, and it acts only to alienate the other culture.