Difference between Curling and Ice Hockey

Key difference: Curling is a sport in which players pass stones from one end of a sheet of ice, into the target area situated at the other end. Ice hockey is a team sport consisting of six players on each side, which is won by scoring the most number of goals in the opponent’s net. 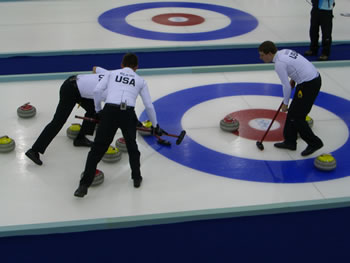 Curling is played between two teams, having four players each. The objective of the game is to collect most points by sliding granite stones, also known as rocks, along a sheet of ice and right into the marked target at the end of the sheet. These marks are circular and are made up of four rings subsiding within each other. Each team is allotted eight stones, which makes it two chances per player. Points are awarded on the basis of the proximity of stones to the target. The closer the stone is to a target, higher would be the points scored. This process is continued until both the teams have exhausted their allotted eight stones. This exhaustion is called as an end, in curling terms, and a curling game comprises of eight to ten ends generally.

While a player slides the stones, the other three assume the designations of a curler, and two sweepers. The curler’s job is to help the stone reach as close as possible to the desired target. This, the curler does by inducing twists and turns in the stone’s path, in order to cut down on its speed. Similarly, the sweepers have the responsibility of altering the state of ice ahead of the stone, which it is yet to traverse. Curling is a game in which all the players have to collectively strategize, and plan accordingly, to derive the best possible result. Curling draws its nickname of “Chess on Ice”, exactly due to involvements of these kinds. Curling is also known as “The Roaring Game”, in many parts of the world. 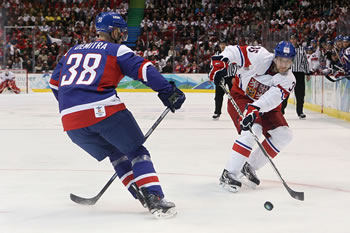 Ice hockey is a sport contested between two teams having six players each. Ice hockey is played by skating up and down the ice field in pursuit of a rubber puck, which when obtained, has to be put into the opposing team’s net using a stick, so as to score a goal. The purpose of this game is to score more number of goals than the other team, in order to win. The game lasts for sixty minutes, divided into three twenty minute periods. Each time, the game starts from the centre circle, where the referee drops the puck. The referee is the one who runs the game. The referee’s job is to ensure that the game is played according to the rules and the right spirit. Apart from this, the referee also holds the authority of penalizing a player, who commits an illegal offence in the game, according to the rule book.

Since ice hockey is played on ice, the game is really fast and intense, with unavoidable physical contact as well. In effect, ice hockey is also christened as “the fastest game on earth”. This sport is very popular in the continent of North America, wherein Canada and United States are its keen exponents. Whereas in Europe, the Czech Republic, Finland, Russia, Slovakia and Sweden are known as the big names, when it comes to ice hockey. As a matter of fact, from the 1920 Olympics, these European and North American teams have bagged a staggering sixty Olympic medals among them. Moreover, all the twelve Olympic medals in the women’s category till date have gone to none other than these seven nations.

Comparisons between Curling and Ice hockey: