Difference between Cynicism and Criticism

Key Difference: Cynicism reflects a contemptuous or mocking attitude of various ideas or solution, whereas criticism defines the judging attitude and in modern world it is often taken as a negative opinion. 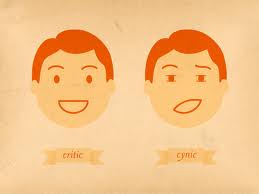 Antisthenes of Athens (c.445-c.360 BC) is known as the founder of Cynicism. The name ‘cynic’ derives from the Greek word ‘kuon’ meaning ‘dog’. It denoted the denial of luxuries, wealth and social status. He believed that desire takes a person towards pleasure and misery and this misery is due to insufficient and temporal happiness. He regarded the well-being as the only virtue that is required in order to get the real happiness. The cynics believed in the philosophies of Socratic tradition which indicated that the society is being cheated by false values and thus people should not give preference to status and luxury.

Cynics lived in streets with no money and, this was the way they thought they are able to live a greed-less life. This background explains that how the word cynicism came into existence, and in modern understanding it is explained as a form of doubt resulting from ignorance and antiquated ways or we can also say it as an attitude of lack of respect or jaded negativity. This modern explanation of the word cynicism is very different from the original explanation. Cynics don’t trust the real intentions of others.  They may also question every action, real or imagined of their fellow human beings. Today, it means an attitude that is conscious of bad or evil acts but still commits them. Sometimes cynicism is also linked with hypocrisy. This may seem confusing but people had adapted it in different meanings and thus there are numerous definitions to explain the meaning of cynicism.

An example of Cynical statement:-

“You are ridiculous for thinking that good and bad matters” 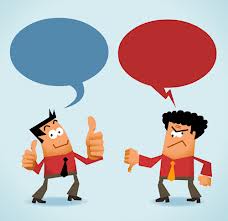 Criticism involves an unbiased approach of a person towards a thing, an idea, a person etc. The person who is responsible for criticism is known as a critic. To explain it further, we can relate it with an example of a film critic. A movie critic watches a movie. In the process he analyses the movie with its pros and cons. His criticism leads to certain results and ratings for the movie and then these results are printed or broadcasted in various types of media. People consider the opinion of a good critic and then decide to watch a movie or not. It is up to the viewers to get influenced by the critic or make their own opinion. Again, it is sometimes associated with the negative judgment and sometimes in an intelligent manner.

The English word criticism is derived from the French word critique. Earlier the English meaning of criticism was only limited to literary criticism, but now it has emerged as more specialized in nature. From the 1990s, the perspective of looking at criticism took a negative bend meaning that it started referring to dislike or in disagreement with the subject matter. People still use it in forms of sentences like: - “It does not matter how good I write, but she will still criticize my writing”. Philosophers such as Karl Popper and Imre Lakatos have emphasized on the idea, that criticism is a normal part of a scientific activity and therefore "scientific criticism" has become a standard expression, just like "literary criticism".

Cynicism and Criticism both define the expression that one holds for the other thing, person or idea. Cynicism has been evolved into a negative expression, also is categorized into mocking whereas criticism still with its negative usage is defined to judge a particular, person, activity, idea, etc. Both have different origins but the common thing between the both is that they both have been evolved in terms of meanings.