Difference between Delete and Erase

Key Difference: Erase refers to the ability to remove something from a certain place. Once it is erased, it is gone from existence. Delete refers to removing files from one place, but it is still there in another place. 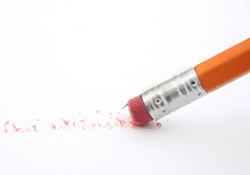 The terms ‘delete’ and ‘erase’ are considered as the same in spoken language and is commonly used interchangeably. When we refer to the terms delete and erase we refer to removing or canceling something. When we erase, we talk about removing a mark by rubbing it. For example: using an eraser to remove the answer written by a pencil. Now, delete is more like throwing it out to removing it from view. These terms may seem like they are referring to the same thing. However, these are different from each other in many ways.

Erase is used in a digital as well as the real world, while delete is only used in the digital world and is found in computing systems. In the real world when we talk about erase we are referring to the ability to remove something from a certain place. Like the example we gave earlier using an eraser to remove a pencil mark from the paper. Once that mark is removed from the paper, it becomes non-existent, like it was never there before. After the mark is erased we can re-write something else on it. In the digital world, it is the same. Once something is erased, such as a hard drive it is impossible to bring it back or recover something from it. 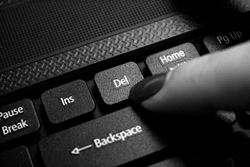 The word delete is mostly found in the digital world referring to removing something from one place and putting it in another. When we delete files from the desktop it goes into the recycle bin; however, if the files are too big for the recycle bin it may permanently delete them. But there is a catch, when we delete something from the computer the data is not removed or erased from the hard drive, it is still there. However, the place where the data was saved is marked by the system as being empty, so the next time a person saves something it over writes that area. When we delete something from the computer, it is usually recoverable, maybe not manually but one can use recovery software to bring back the data. But once the data is rewritten, the older data is erased and written over with the new data.

Hence, in the technological world deleting only refers to removing the object, but the evidence of that object is still there. However, erasing refers to completely wiping it out meaning it is not longer available or recoverable. The delete button is found as a physical button the computer, marked as ‘Delete’ or ‘Del’.

When you type something, put the cursor in front of it and press "DEL" or "Delete" on your keyboard. It's not moved anywhere, so this explanation doesn't really hold up. You even use a photograph of this key in the article!

It is moved to a thrash-file location. Or at best, it is moved and then overwritten by another digital signature, but it is still there. You can retrieve deleted files. But, can you retrieve erased files? No, you cannot.