Difference between Derby and Oxford Shoes

Telling the difference between men’s fashion can be a difficult task for anyone who is not part of the fashion scene. The reason for this is the fact that men’s fashion is pretty much standard; it does not deviate much especially for the average man. Even when there is variety, the deviations are so minor that they are easy to miss. Derby and Oxford Shoes are one such example.

Derbys and Oxfords are two different styles of shoes. They are both formal shoes that can be made out of calf leather, faux and genuine patent leather, suede, and canvas. However, today there are many simpler patterns available in both varieties that are targeted towards casual wear rather than the traditional formal wear.

Ideally they were commonly only black or brown, so as to pair well with most suits. Yet today that are commonly available in various colors and patterns, primarily since men’s style has evolved over time demanding more variations and styles so that they are able to pair them differently than the generations before them.

Oxfords rose to popularity in the early 1800 for being worn at Oxford University. From there it garnered popularity around England, and then eventually around the world. Oxfords are famous as a formal shoe. In fact, at any formal event, chances are you’ll see most, if not all men wearing Oxfords. These are the go to shoes for any event or occasion.

Derbys, on the other hand, are generally considered to be slightly less formal than Oxfords. Derbys became popular as a hunting shoe, as it had a more comfortable fit, especially for people with wider feet. Eventually, the Derby got popular as an indoor shoe, and eventually as office wear. Today, Derbys are considered to be formal shoes, and are second in formality only to the Oxfords.

However, in reality both Derby and Oxford Shoes are quite similar in pattern. Both are laces up formal shoes, i.e. formal shoes with laces. Just looking at them, most people won’t even be able to tell them apart. Practically, the only difference between a Derby and an Oxford is the manner of the lace stitching. Derbys have an open stitching, whereas oxfords have closed stitching. Basically, imagine the Derbys as having two pieces of flaps that are stitched to keep them together, whereas the Oxfords are more like an edge rip sown together. 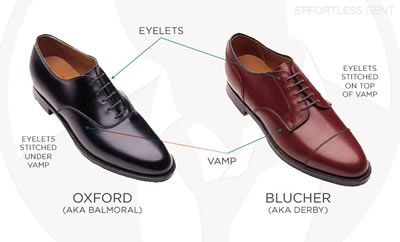 Another difference between the two are the manner in which the eyelets, i.e. where the laces go through the shoes, are attached. In the Oxford Shoes, the shoelace eyelets are attached under the vamp, which results in the eyelets not being visible. In fact, it almost looks like the shoe does have eyelets at all. In the Derbys, the eyelets are attached to the top of the vamp, where there are clearly visible. The vamp is just the official name for the entire part where the laces go through. Sometime this goes through all around the show, at other times it is only a part.

Comparison between Derby and Oxford Shoes: