Difference between Dolphins and Porpoises

Key Difference: Dolphins and Porpoises are both mammals that differ in terms of body shape, shape of dorsal fin, teeth, behavior, traveling pattern, speech and lifespan.

Although not many people know it but there are various different types of dolphins and many cetacean creatures that resemble dolphins but are not at all dolphins. Dolphins are known for their intelligence (which according to some is higher than humans), although this theory is now receiving criticism from researches that claim there is no definite proof that dolphins may be smarter than humans. Porpoises are cetacean mammals that are often confused for dolphins because of the similarities in their looks, but are actually part of a different family.

According to its taxonomy, Porpoises and Dolphins both fall under the Delphinoidea Superfamily, making them something similar to cousins. They both share many features that are quite similar including being mammals, having a similar anatomy, preferring the same type food and not having gills (but rather lungs).

Both the species are mammals, which mean they are warm blooded; they birth their babies live and nurse their young. Similar to all Cetaceans, dolphins and porpoises, both have lungs, rather than gills. This means that they cannot breath underwater and have to surface from under the water to breathe air. This is done by a small opening on their head, which is used to suck in air. Depending on their size and type, these mammals can survive under water without having to resurface. Dolphins and Porpoises can hold their breath for a long time, ranging from 5 minutes to 20 minutes.

Both the mammals are also known for using echolocation, or using series of sounds in order to make their way to their prey or travel. Both feed on squids, fish and other small crustaceans and they both suffer major threats from humans. Even reproductive anatomy is the same in both the creatures. Males of both species have two genital openings on their ventral side, while females have four: two for their sex organs and two for lactation, with teats found inside the body. Both species have short mating seasons and females produce often one or two calves at one time, one being more common. 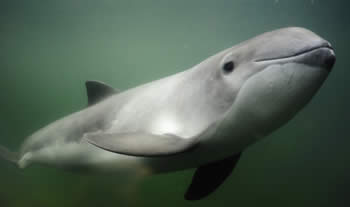 The major differences between the two lie in the anatomy and how they look and they can easily be set apart if the person knows what to look for. Although, both have a similar set of organs, the way the organs look differ. While, dolphins have a rounded head with a prominent triangular shaped rostrum or beak, porpoises have a smaller and more rounded rostrum. Similarly, the dorsal fin (or the small fin on their back) also differs among the two. Dolphins have a more hooked shape dorsal fin (it resembles the shape of a wave), while porpoises have a more triangle shaped dorsal fin.

Other differences include the body shape, teeth, behavior, traveling pattern and speech. Dolphins tend to be leaner, with a longer, streamlined shape. However, porpoises have a thicker more robust body that makes them seem a bit chubbier. Teeth are the simplest and most dangerous way to tell them apart. Dolphins have sharper, conical teeth and porpoises have spade-shaped teeth. Dolphins are far more interactive and friendly; they like to also jump up and swim alongside ships and swimmers. While, porpoises are more shy and they do not like to interact with humans. Dolphins are also found in packs of a dozen or more, they live to travel in large packs, while porpoises travel in pods of two to four. Lastly, speech is another easier and safer way to tell them apart. Dolphins are talkative and they make speech patters that can be heard by humans, while porpoises make noises at a decibel that is inaudible to humans. So, if one can hear them, they are most likely dolphins. Dolphins also have a longer lifespan compared to porpoises, with dolphins living to 50 years and porpoises surviving till 15 years of age.

Comparison between Dolphins and Porpoises: