Difference between Dynamic and Static RAM

Key Difference: A dynamic RAM chip holds millions of memory cells, each made up of a transistor and a capacitator. The chip constantly needs to be refreshed. Static RAM differs as it holds information in a flip flop manner, which means it does not require to constantly refresh and do not use capacitators.

Random Access Memory (RAM) is a form of memory that is used by computers in order to store information. Dynamic and static RAM are two types of RAMs that is simultaneously used by the computer in order to store an access data.

Dynamic RAM is the most commonly used RAM and is also considerably cheaper, but even static RAM has benefits. A dynamic RAM chip holds millions of memory cells, each made up of a transistor and a capacitator. The capacitator stores electrons in computer memory cells and is responsible for holding information. In dynamic RAM, information is held as a charge in 1 or 0, where 1 means it has information and 0 means it is empty. 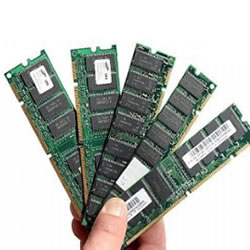 The transistor acts as a switch that lets the control circuitry on the memory chip read the capacitor or change its state. The problem in dynamic RAM is that capacitator leaks energy and can only hold a charge for a fraction of a second. Hence, it needs to constantly refresh the circuit to read the charge. The refresh happens hundreds of times every second and all the cells must be read over and over again to see if the information is there. So, at every charge the computer reads and re-writes each bit of information.

Static RAM differs as it holds information in a flip flop manner, which means it does not require to constantly refresh and do not use capacitators. The computer accesses the information as required, which makes them more energy efficient. However, they have very limited storage capacity.

RAM requires multiple transistors to store one bit of information, which means if you want more storage space you would require more chips. This makes it very expensive. The chip is comparatively faster because only the chip that is written on is read, which means it can easily access the data and would not have to read every bit.

Static RAM is used to create the CPU's speed-sensitive cache, while dynamic RAM forms the larger system RAM space. Every time you turn off your computer or restart it, the system looses its cache memory, while the dynamic RAM memory is still present.

Comparison between Dynamic and Static RAM: