Key Difference:  There are numerous ways of tying a tie knot. The size and shape of the tie knot is used to differentiate it from the other types. Every tie knot has a particular procedure to be followed in order to achieve the perfect look.

Ties are just a decorative accessory but still they have an essential vital space in a man’s wardrobe. Many people believe that this accessory evolved during the 17th century, when soldiers of King Louis XIII wore a piece of cloth wrapped around the neck as a part of their uniform.  This piece of cloth went through lots of stages of evolution and finally attained its modern version.

There are many ways in which one can tie a knot for neck tie. All require some different steps in order to get the desirable knot. Some of the common types of tie knots are –

Simple Knot – this knot is also known as the oriental or kent knot.  This is the easiest type of knot to be tied, and therefore is termed as the simple knot. It is quiet popular type of knot in China. It is just made by simple loop forming from the wide end of the tie over the narrow end. It is also known by the name of four in hand knot. However some believe that that are little variations in both. 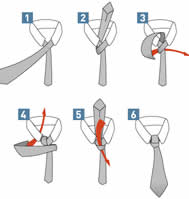 Half-Windsor Knot – This is a knot which is regarded as more formal than four in hand type. It is medium type and is triangular shape wise.  It is similar to four in hand knot. It can be regarded as the thicker and a wider form of it. Its complexity is little more than that of four in hand. It appears as an inverted triangle. It is best suitable for medium width spread collars. To tie this tie knot, one extra step takes place in which the wider end takes a loop extra in the upward direction after taking a loop in horizontal manner. 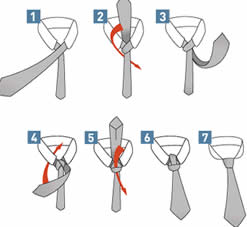 Full- Windsor Knot It is best suitable for longer and wider ties. Though, its shape is similar to that of half Windsor, its size is larger than it. One is recommended to wear these knots at some highly formal or official events. The method is complex than in comparison to half Windsor. It makes use of forming a vertical loop first and then a horizontal one.

Prince Albert Knot – It is also sometimes known as double simple tie knot as it requires a second wrapping of the wide end around the narrow one.  It is suitable for those who are looking for a large knot. It needs two tightening – one after the first wrapping and the second after the second wrapping. At times the first wrapping is too much visible and it does not look that great.

Cross or Christensen Knot – This long and narrow knot is also known as the Christiansen knot. It is suitable to be worn with narrow collars. It is somewhat difficult to achieve. This tie is wrapped in a different manner. Unlike Albert, it is wrapped involving a step in which the broader end is looped in vertical direction before the final wrapping. This looks smart with fabric ties. 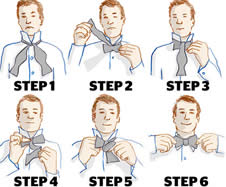 Bow Tie Knot – This knot creates a beautiful bow. It is made usually made by a special type of tie. It is tied in the way similar to that of a shoelace. When finishes it comprises of two opposite loops and two opposite loose ends. It needs a good amount of practice to achieve a neat bow tie. It is regarded to be the most elegant among the neckties. 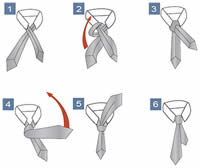 Pratt Knot – Jerry Pratt is credited for this type of tie knot. However the other name for this tie knot is Shelby. This knot is semi wide types (less wide than Windsor knot) and one needs to turn the tie in outward direction before starting the procedure. Wide end is kept below the narrow end. Wide end is made to cross the narrow end and then wide end is taken over and under the narrow end. Finally the loop is pulled down and tightened in order to firm the shape of it. 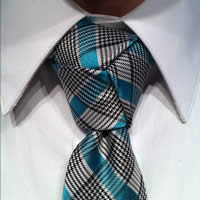 Trinity Knot – This knot is placed in the category of exotic knot. This tie knot is quiet new in comparison to other neck ties.  This knot is little larger than Windsor knot. The impressive rounded shape is very appealing. The procedure of forming this knot is quiet tricky. As one needs to form knots in all the directions in order to get this knot. It is suitable for patterned or tie with small stripes. 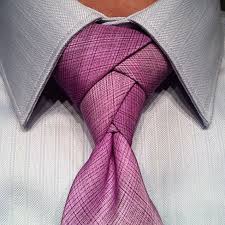 Eldredge Knot – This is also an exotic knot which is triangular and wide in shape. It is important to use a long or extra-long tie for forming this kind of knot.  It is most suitable for ties with plain colors and fabrics. It takes a lot of careful handling to get the perfect look. It looks similar to a braid. It requires numerous steps of looping. If anything goes wrong then it is very difficult to adjust it.

The pictures for the half-Windsor and the Windsor is the same knot, just two different drawings...