Difference between Earth and Venus 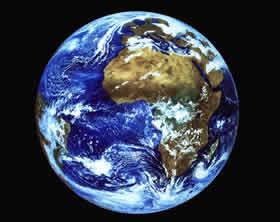 Earth is basically a planet where a person can live. It is the world where one can survive because of atmosphere. The Earth is the third planet from the Sun, which is spherical in shape, and revolves around the sun. Earth is a planet that has life; it is composed of many minerals and is a solid mass that is compacted with rocks. The Earth rotates on its axis from the west to east, and revolves around the Sun. The Earth completes one rotation in 24 hours and one revolution around the sun in 365 days. Hence, this time period is called a year.

Venus is the second planet from the Sun. Venus does have atmosphere, but it is primarily contained of carbon dioxide as compared to the atmosphere found in planet Earth, which is contained mostly of nitrogen and oxygen. The size of Venus is as similar to the Earth, and it is often described as Earth’s sister. It was basically named after the Roman goddess of ‘love and beauty.’

Comparison between Earth and Venus: