Difference between Ebola and Cholera 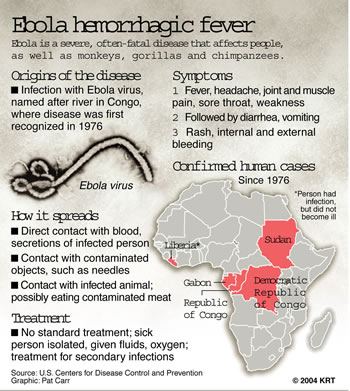 The 2014 outbreak of West Africa has led to a widespread fear of Ebola. However the initial symptoms of Ebola are quite similar to cholera. Ebola hemorrhagic fever is a disease caused by the ebolavirus. It is a deadly disease that kills between 25% and 90% of the people it infects. However, cholera is no small matter either. It is caused by the bacterium Vibrio cholerae and infects 3 to 5 million people annually, resulting in 100,000 130,000 deaths a year. Ebola, on the other hand, has had a total of 1,716 reported cases in 24 outbreaks since its discovery in 1976. The 2014 West Africa Outbreak resulted in 13,042 reported cases and 4,818 deaths by 2nd November, 2014.

The symptoms of Ebola include a fever, sore throat, muscle pain, and headaches. Vomiting, diarrhea and rash usually follow, as well as reduced liver and kidney function. After this, the patient may suffer both internal and external bleeding and may die due to low blood pressure from fluid loss. This may occur six to sixteen days after symptoms appear. 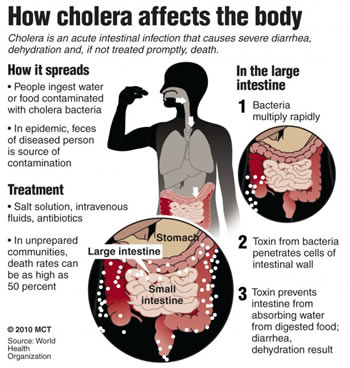 The symptoms of cholera include profuse watery diarrhea and vomiting. The diarrhea is frequently described as "rice water" in nature and may have a fishy odor. As a single patient may produce 10 to 20 litres (3 to 5 US gal) of diarrhea a day, this often leads to severe dehydration and electrolyte imbalances. This may also cause the patient to be lethargic, and have sunken eyes, dry mouth, cold clammy skin, decreased skin turgor, or wrinkled hands and feet, as well as a deep and labored breathing pattern, low blood pressure, rapid and thready peripheral pulse, muscle cramping, weakness, altered consciousness, seizures, or even coma.

However, the most notable difference between the two diseases is the fact that Ebola does not have a cure or a vaccine and the patient is only treated for the symptoms that he exhibits. While cholera does not have a cure and patients are similarly treated for their dehydration, cholera has several safe and effective oral vaccines that are effective for up to 2 to 3 years.

Comparison between Ebola and Cholera: