Difference between Error and Exception

Key difference:  Both, error and exceptions are derived java.lang.Throwable problems. An ‘error’ is a serious problem that cannot be recovered once occurred, whereas an ‘exception’ is a problem which can be handled and corrected after execution.

An ‘error’ in Java is a serious problem, which once occurred cannot be handled and recovered. An error is defined as “any departure from the expected behavior of the system or program, which stops the working of the system”. It comes under the Throwable class, which categorizes it as a serious and reasonable application. After its execution, this application re-occurs several times, creating an interruption in the systems functions. There are several subclasses under the error form. These errors occur at specific levels and functions, and are handled by specific functions. In a broader way, these errors can be broken into two categories: Design-time errors and Logical errors.

Basically, there are two main types of errors and their conditions:

Further these types are subdivided into other forms.

An ‘exception’ in Java is a problem which can be handled and caught. It is basically defined as “any error or problem which one can handle and continue to work normally”. It is a runtime error, which can be corrected and handled at the time of execution. Exceptions mostly occur during the execution of any program. It may occur due to any reason, such as a user has entered invalid data, a file that needs to be opened but cannot be found, a network connection that has been lost in the middle of communications and when the JVM has run out of memory. Some of these exceptions are caused by user errors, while others by programmer error and by physical resources that have failed in some manner. The java.lang.Exception class consists of all the exception subclasses. These exception classes are subclasses of the Throwable class. The exceptions are handled and caught by the exception method techniques. There are various exception methods and techniques which handle different types of exceptions. 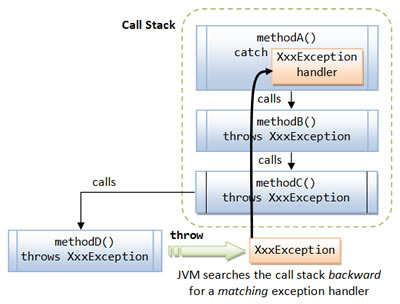 In general, there are the following types of exceptions:

Comparison between Errors and Exception: